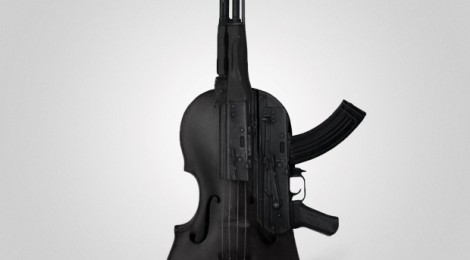 Symphony Soldier (2011) is the successful second album of The Cab. Its genre is classified as “soulful pop rock,” with elements of R and B, pop, and rock.  It is mostly a fun, catchy album to listen to because the audience can listen to these songs countless times.

“Angel with a Shotgun” is the opening song to the album. There are religious elements to this song. The concept behind this song is very unique because it is about a figurative soldier preparing to fight for love.  The song also ties in with the album cover nicely. The album cover’s focal point is the cello-gun, which displays the album title very well.

Another song that contains religious elements is “Her Love is My Religion.” While not one of the best songs of the album, it is well done and quite beautiful. The comparison to his love to a girl as sacred as to one’s devotion to religion is an interesting concept.

One of the album’s star songs is “Endlessly”, which is just overall beautiful. It is also one of the few songs in the album that has a music video to the song. In the music video, a girl discovers a locked box and tries to find the right key to open it. She goes through several keys that are hidden in the house and eventually gives up. In frustration, she throws and breaks this box. However, she sees a ring that falls out of the box. She suddenly reaches an epiphany. This vague ending gives the audience the opportunity to interpret the video in many ways, since it leaves much to to the imagination. The masterful glimpses of the singer and close-ups are elegant and high quality that overall shows the beautiful cinematography that was put into this video.

The only negative of the gorgeous video is that it does not tie into the lyrics that well. Instead, the lyrics are describing someone, presumably a male, who may not be wealthy, but can offer his endless love to his lover. The ring is mentioned in the lyrics, but that is the only literal connection to the music video. The lyrics are equally as beautiful as the video, which makes sense since it has been co-written by Bruno Mars.

“Intoxicated” contains a fascinating comparison. Usually, intoxication refers to the state of mind that occurs from drinking a lot of alcohol. In this song, the singer is intoxicated by love. The background music and build up adds to this feeling with high notes indicating euphoria.

“Temporary Bliss” is about wanting a more meaningful relationship than just physical actions. It shows a different point of view, because in today’s society, guys, especially teenagers and young adults, are depicted as the ones that prefer a more physical relationship than deeper ones.

While the previous five songs are centered on the concept of meaningful love, “La La” is the total opposite of the “Temporary Bliss.” The message is about wanting a purely physical relationship. This song is very pop-like and catchy by its repetition of the words.

“Bad” is about the singer wanting a relationship with a more exciting, “bad” girl. This is another song that has a music video, but the quality is not as top-notch as the music video for “Endlessly.” However, the way that the video is filmed is appreciable. Instead of filming in a fairly continuous shot, the video consists of a series of pictures taken along with text messages between the girl and boy in the relationship. This gives the effect of slow motion The rating should be PG-13 because of the revealing nature of the video.

“Animal”, like “Bad”, is another fun song. It is about lust, but not in the typical manner. Instead, lust is used in a metaphor of a predatory animal. While not as innocent as some of the other songs in the album, they are still catchy songs one could sing along to.

Another aspect of love is the heartbreak phase. “Lovesick Fool” is a sad, yet beautiful song about the loss of love. It is not as upbeat as most of the songs, which adds to the feeling of loneliness. “Another Me” contrasts the previous song by being a fiery break up song. It is passionately vengeful towards the ex.

As one of the two songs that does not focus on love, “Grow Up and Be Kids” is a very carefree song that reminds the audience to remember the pleasant things in childhood. It’s a cute and spunky song with unique instrumentals. “Living Louder” is an inspirational and uplifting song that has a great message of Carpe Diem. This overall feel good song is a great ending song to a fantastic album.

The songs mentioned before are the twelve songs in this album. Each song has a slightly different sound, but when combined together, it is cohesive. These songs emphasize Alex DeLeon’s beautiful voice, which is not marred by autotune like in their previous album, Whisper War.  The instrumentals add another dimension to the songs, but not in an overpowering way. The audience can hear piano, guitar, violin, cello, and other instruments.

Symphony Soldier was released after a fairly long break of three years. The results were well worth the wait. These songs felt more genuinely made in contrast to the previous album, which was catchy as well, but very commercialized.

The meaning behind the title Symphony Soldier is someone who fights for his or her beliefs in music. The Cab truly accomplished that by leaving Fueled By Ramen, a major record company, because the band wanted to make music that it wanted. The three current members of the band, the lead singer Alex DeLeon, Alex Marshall, and Joey Thunder funded the album by themselves. This added struggle enhances my appreciation of the band and the album. The sheer difficulty making songs that are fun to sing along to that are meaningful makes the success of this album well-deserved.

The Cab is currently working on a third album that is supposed to be released this year. I hope it is as wonderful, if not better than Symphony Soldier.