Qing Ming Festival started as a holiday to honor Jie, but as years passed, the celebration took on a whole new meaning. The old principle of remembering and honoring the dead remained; but the holiday no longer specifies whom to honor.

Instead, the emperors after Chong Er decided this holiday would be nice to celebrate life. Since this holiday falls around April 5th, some emperors believed it would be a good time to plant trees, symbolizing new life. It was also a popular time for courtship between young men and women.1 Therefore, Qing Ming evolved from a once solemn memorial day into a festive holiday celebrated by the Chinese people.

Painting of a town during Qing Ming Festival

Qing Ming has retained the traditional values of honoring the ancestors, but in a much more cheerful mood. On this day, family members gather together to visit the grave sites of ancestors. However, they do not just go and pray; they also bring along a lot food. But before I get into the topic of food, we will focus on the praying rituals.

First, let me introduce to you the products needed for praying. The most important thing are incenses and joss sticks. They are burned because according to the Daoist beliefs, people’s souls migrate after death to an underworld.

In the underworld, the souls cannot eat solid food the way the living can; therefore, the descendants have to burn incenses as a means of sustaining their ancestors.

When my family and I celebrate Qing Ming, we bring a few packs of different sized joss sticks and burn them. Of course the explanations for the uses of incenses and joss sticks vary due to religious beliefs and cultural differences, but overall they get burned in order to show honor to the ancestors as well as the gods. 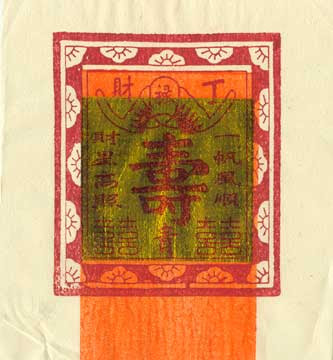 One type of Joss Paper

Besides burning incenses, the Chinese burn joss paper and Hell Bank Notes.  Joss paper is a coarse type of paper with gold or silver squared printed on it. Burning joss paper ties back to the belief of burning incenses; there are souls in the underworld and they need money for survival.

Even though they do not need to eat, they still have to pay their way through underworld so that they would have an easier time. Hell Bank Notes is one of the new form of imitation money. However, as long as three thousand years ago, the Chinese burned imitations made from metal and clay. 2

Burning incenses and spiritual money is a deep rooted practice that acts as a way of honoring ancestors by providing for them even after death.

But since the ancestors cannot eat, why would there be such elaborate festivals? These festivals serve the living. Many Chinese people believe that eating certain types of food bring good luck and thus eat mainly only those types of food.

Learn more about the importance of food based on symbolism.