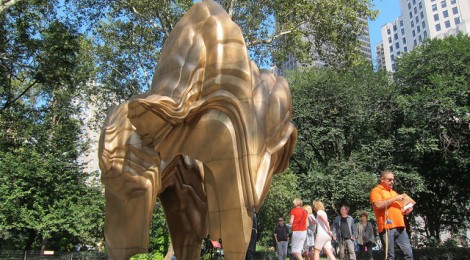 Remember Rachel Feinstein’s “Folly” in Madison Square Park? Well, I walk through this park everyday on the way to class, and noticed a new exhibition placed in the park. It’s called “Walks of Life” and is composed of three large bronze sculptures. The artist behind these large-scale works is Tony Cragg.

Tony Cragg is a British artist (now living in Germany) who has had his art displayed since the late 1970’s. He arrived last year to scout out Madison Square Park and decide how to arrange his exhibition in the park. These sculptures are actually very big, but as Cragg puts it, “They’re quite big sculptures, but everything in New York is big.” He makes a point… I find it intriguing that foreign artists are interested in displaying their art in New York City (let alone a park and not a gallery). The effort put into traveling halfway across the world in order to display his art in a foreign culture is ambitious. Cragg has received various awards in Europe, but was he so sure his art would be praised here just as much?

I’m sure Cragg is pleased at the sight of his bronze sculptures fitting right in – they seem to always have a large crowd surrounding them or taking pictures. Just like much of the art displayed in the park, the sculptures have an approachable feel. I enjoyed the three dimensional aspect, and felt as if Cragg wanted the audience to engage with his work. “Caldera” is the name of the first sculpture (shown above). The other two are called “Mixed Feelings” and “Points of View.” The pictures are shown below, respectively. The last two sculptures seem more related to one another than the first sculpture. They remind me of the rocks in zen gardens that are stacked on each other and have peaceful surroundings. The sculptures generated the same kind of peacefulness in the middle of the park for me; after walking through hectic streets, it was refreshing. I wonder if that’s what Tony Cragg intended to do.

← The Cloisters
Complexions Contemporary Ballet at the Joyce Theater →

the skint: daily list of free things in nyc