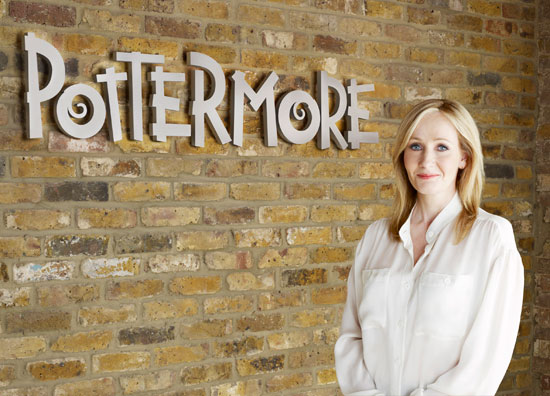 Harry Potter fans will be happy to know that Pottermore, the interactive website dedicated to the wizarding world of Harry Potter, finally launched on Saturday, April 14th. Pottermore was supposed to open to the general public last October. However, after receiving feedback from the early Beta users, the site administrators realized that Pottermore would not be ready when millions of additional users flooded the website. Now that necessary corrections have been made, the site has been performing well. Users currently have access to activities and additional material related to the first book, Sorcerer’s Stone.

Kiss & Make Up, by Katie D. Anderson, was recently acquired by Amazon Children’s Publishing as the imprint’s first young adult book. The debut novel, which reportedly sold for six figures, is about a teenage girl who can read the thoughts of anyone she kisses. Though Kiss & Make Up will not be published until October of this year, it seems that Amazon already sees potential for a franchise. Warner Brothers has bought the book’s film rights, and has plans to make the story into a web series. According to Publisher’s Weekly, there is also talk of collaboration with a cosmetics company, to create tie-in make-up products.

In other YA news, One Teen Story, a new literary magazine for young adult fiction, will publish its first issue this September. One Teen Story is modeled after the magazine One Story, which only prints one short story per issue.  Subscribers will receive a total of nine issues per year (one for each month of the school year), either in print or electronic format.

One Teen Story will be accepting unsolicited story submissions for their first year March 15th thru May 31st. In addition, the magazine is also holding a Teen Short Story Contest, specifically for writers age 14 to 19.  The winning story, which will be selected by young-adult novelist Gayle Forman, will be published in the May 2013 issue. Submissions are due online by May 31st.

In April, four notable authors released their latest works. The Beginner’s Goodbye, by Anne Tyler (April 3rd), is a novel about a recently widowed man who comes to peace with his wife’s death through her repeated appearances from beyond the grave. On April 10th, Calico Joe, by John Grisham, was published. Though Grisham is well known for his legal thrillers, Calico Joe is the fictional story of Joe Castle, a Major League Baseball rookie in 1973. Stephen King and Jonathan Franzen both released books on April 24th. King’s book, The Wind Through the Keyhole, is stand-alone novel in his Dark Tower series. Franzen’s book is a collection of essays and speeches, entitled Farther Away, from the past five years.