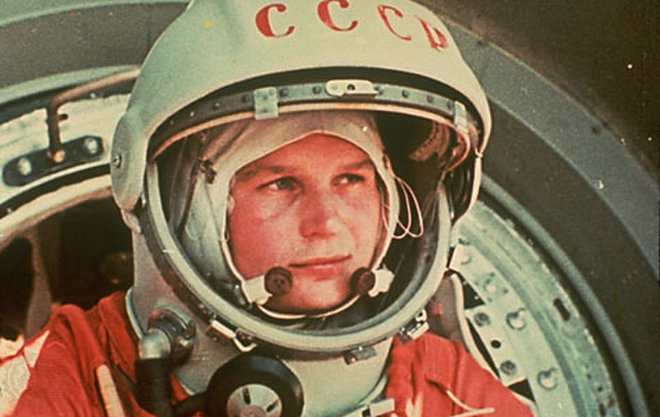 The year is 1963, just six years before Neil Armstrong took one small step. At this stage in the great space race, Yuri Gagarin had already made history by being the first human to enter space and orbit the planet in 1961. Because of his flight, a Soviet woman who dropped out of school to find work at a textile factory found inspiration to make her dreams of the sky a reality.

Valentina Tereshkova was educated through correspondence classes and had no experience as a pilot. Her only qualifications to be part of the female cosmonaut corps were her physical stature, age and parachuting experience. Her hobby as a parachuter turned her into the finalist among 400 candidates. After undergoing rigorous training, she launched in the Vostok 6 on June 15, 1963 and orbited the Earth 48 times in three days. The photographs she took of the Earth later helped identify the aerosol layers within the atmosphere.

As she made the descent back through the atmosphere, she narrowly avoided a catastrophe: something had gone wrong with the flight’s automatic navigation software, but Soviet scientists quickly found a new algorithm after Tereshkova notified them. Tereshkova stepped back onto Earth with only a few bruises to show for the near disaster. Her journey proved that women, too, could reach the stars.

Many Americans will have heard the name Sally Ride before as the first American woman in space. However, not everyone knows of the hard work and great perseverance she had in order to launch into the skies. Ride was a woman of impressive credentials, an inspiration to girls and women everywhere with a love for science. She studied physics and English at Stanford University and received a Ph.D in physics in 1978. At the same time, she qualified to be the final choice out of 1,000 candidates for NASA’s astronaut program. Ride completed the rigorous training and finally got her chance to go to space on June 18, 1983, when she lifted off aboard the space shuttle Challenger.

Ride was just as much of an inspiration on Earth as she was in space. After successfully completing two trips into space, she became both a professor and director of the California Space Institute at the University of California, San Diego in 1989. She also became president and CEO of her own company, Sally Ride Science. To this day, the non-profit strives toward the legacy Ride left behind: encouraging and supporting girls and women to pursue their love of the STEM fields. Through her, women find opportunities to continue breaking barriers and creating records.

Unlike the previous two historical giants, this next astronaut may be unknown to most. However, Kathleen Rubins is one of the greatest modern inspirations to girls and women of science everywhere. As the flight engineer on the Soyuz MS-01 in July 2016, she is the most recent female astronaut to travel to space.

Even though she is the 60th woman to do so, she still managed to find a record to break. In August of 2016, she became the first person to ever complete a DNA sequence test in space. This test was part of an experiment that has the potential to help discover DNA in other parts of the universe: Rubins helped us get one step closer to determining if life exists out there.

Rubins has a Ph.D in cancer biology from Stanford University, and has researched HIV, smallpox (she and her colleagues developed the first smallpox infection model, another record), and various other viruses. She may be leading us closer to lives elsewhere, but her scientific work on Earth is saving lives here.

In total, 60 women have been to space, all of whom are equally impressive as the three above. As of April 2018, there are three more women who are scheduled to fly into the stars in the next two years. Although there is a disheartening gap in the ratio of men to women space travelers — there have been 562 people in space so far — each and every woman who has gone up is an inspiration to all girls and women, STEM or not. If women can defeat gravity, women can do anything.