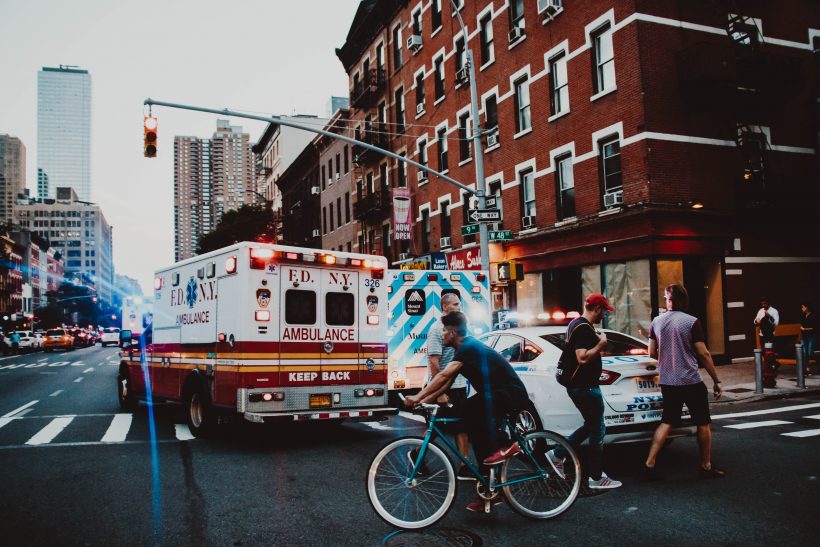 Macaulay students dorming at Hunter College’s Brookdale Campus were in for a rude awakening—quite literally—upon moving in this August.

Residents have reported a wide variety of different sounds that induce sleepless nights, ranging from panicked yelling to sirens blaring from trucks that rattle as if they’re ready to come unhinged at any second. These sounds are standard, as living in the city is no quiet matter. But the most peculiar of sounds doesn’t sneak its way into the dark corners of the night or schedule itself to go off during a day off (looking at you, fire alarms.)

Rather, it chimes at 7:30 AM every morning like an alarm clock for the unfortunate students at Brookdale.

Some would categorize the mysterious noise as gunshots. Others believe that it’s construction work. A disgruntled Macaulay freshman on the Mezzanine floor could only procure three words when asked about the sound: “I hate it!”

The true culprit of the sound, though, has been revealed in a shocking video taken by an anonymous eyewitness. In the video shown below, a truck from the New York City Department of Sanitation is seen lifting a dumpster. The dumpster’s lid scrapes across the top of the truck, producing the thundering crashing sound.

Because most underclassmen in the Macaulay program are given non-courtyard rooms, they receive the full brunt of the garbage truck’s antics. One student grumbled, “Even though I live on the 7th floor, I still hear it loud and clear. I can only imagine how much louder it is for those on lower floors!”

So, is there anything students can do about the situation? According to the NYC Noise Codes, “quiet hours” for garbage collection run from 11pm-7am when within 50 feet of a residential building. During this time, a garbage truck may not produce more than 80 decibels, which is comparable to an alarm clock (ironically) or the dial tone of a telephone. Any time not within the aforementioned hours, though, is considered fair game for a garbage truck’s noises.

To report the noise of the trucks, calling 311 with details such as the exact time and truck’s number or license plate is the best practice. However, despite the multitude of 311 calls that have been placed over the years, there is still very little that can be done to stop the noise. Collection of trash is necessary, and the sounds produced by the trucks are generally fleeting in nature. As such, investing in earplugs may be the best practice for students in the city that never sleeps.