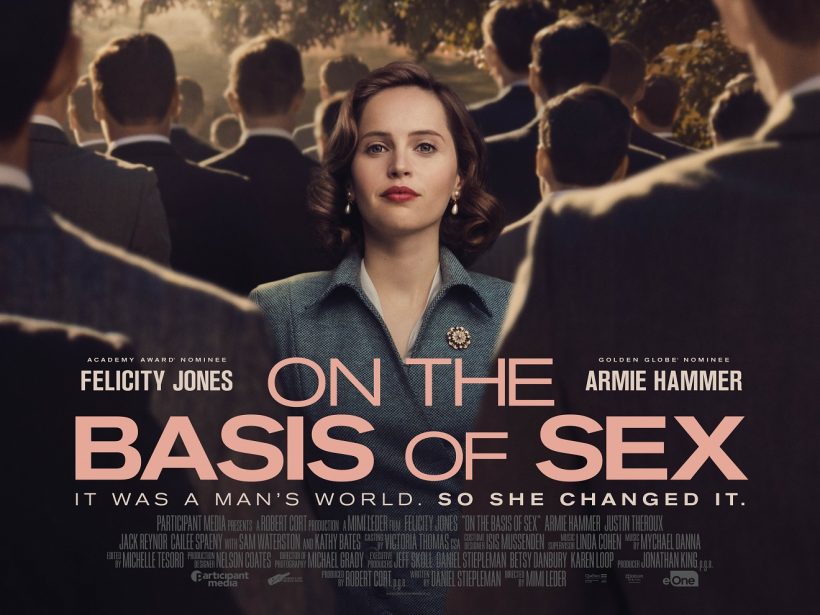 Barnard College kicked off Women’s History Month with the Athena Film Festival; the women’s college advertised the event as “a weekend of inspiring films that tell the extraordinary stories of fierce and fearless women leaders.” From February 28th until March 3rd, the Athena Center for Leadership Studies at Barnard and Women and Women and Hollywood, screened films and hosted post-film panels that focused on women’s leadership and accomplishments. Some exhibitions were world premieres such as Lady Parts Justice in the New World Order. Others were documentaries like, Dykes, Camera, Action! and Life Without Basketball, or workshops such as, “The Technology of Filmmaking,” etc. Although I would have liked to have attended all the showings, given only 24 hours in a day, the feature film I chose to see was On the Basis of Sex — an autobiography of the early years of attorney and Supreme Court Justice Ruth Bader Ginsburg.

On the Basis of Sex — directed by Mimi Leder, written by Daniel Stiepleman, and starring Felicity Jones as R.B.G. and Armie Hammer as her husband, Martin Ginsburg — tells the story of the female powerhouse as she fights to reinvent the justice system against discrimination on the basis of sex. The film begins with R.B.G. as one of the nine female students of her class at Harvard Law School, where she excels despite the snide remarks of the faculty and Dean Erwin Nathaniel Griswold (portrayed by Sam Waterston) who, at an admitted female students’ dinner at his home, asks Ginsburg and her colleagues why they deserved the opportunity to occupy a space at Harvard. Not only did Ginsburg excel academically for herself, but also for her husband, who, in his second year at Harvard, was diagnosed with testicular cancer and given a five percent chance of survival. The young mother attended his classes as well, helping him to graduate and eventually, land a job at a promising law firm in New York City. The job would require the Ginsburg duo to relocate to New York City with their young daughter Jane, and force R.B.G. to end her law school education at Harvard. Ginsburg approaches the Dean Griswold, asking him, just as he had done for former students of Harvard Law School, to allow her to finish her legal education at Columbia and confer to her a Harvard law degree. As he conceded, she had done her first two years at Harvard, which were the most important years of a law school career. The Dean declines her request, and she leaves Boston for New York, matriculating in Columbia for her final year.

Ginsburg ties for top of her class at Columbia but struggles to find work on the basis of sex. 13 prospective hirers from top law firms reject her, but her husband Marty shines in the tax law profession. She ends up at Rutgers Law School as a professor of law, teaching law courses on sex discrimination. She dreams of the day when she can use her degree to practice law beyond the confines of the classroom. That day finally comes when her husband approaches her with a Denver case of a man who, although spending years serving as a caregiver to his mother, was denied a tax deduction on the basis of sex. (The deduction is limited to women.) By taking this case, Ginsberg tries to subvert the implications of the law by representing a man who was shunned due to his gender. By doing so, she believes the appellate court will reexamine hundreds of codes that discriminated against people on the basis of sex.

The film takes us through R.B.G.’s briefings for the case, her collaboration with the American Civil Union and other civil rights activist groups and attorneys, her tense relationship with her daughter Jane, and her devotion to change. Jumping out of the seat on her journey, we end up at the Court of Appeals and listen to Ginsberg serve Dean Griswold and the three male judges. She gives a powerful, forward-thinking rebuttal involving redrafting the discriminatory laws that have set our country back. The film ends with unanimous support for Ginsburg’s client and a real-life R.B.G. walking up the steps of the United States Supreme Court building.

This film is a must-see; it is a spectacular narrative of the life of a remarkable woman whose dedicated efforts led to gender equality reform. Jones brings ferocity to the role, and Hammer plays to our sweet side. I highly recommend it, and sincerely thank the Athena Center for Leadership Studies at Barnard and Women and Women and Hollywood for the opportunity to see it.