The Port of Port Richmond Port Richmond was once a thriving harbor, home of cross-channel ferry service and some of New York's more prominent shipyards. Its connection to the Kill Van Kull was the keystone of its economy. Today, it is but a shell of its former self, boasting only a small tugboat marina. The marina can be seen on the right; one of Port Richmond's more successful competitors is in the background, across from the now-derelict town. Image taken from fieldwork.

Howland Hook Marine Terminal is the only active dockyard left on Staten Island. Located on the Arthur Kill, the facility on Howland Hook resembled those found in the Port Richmond area until about fifty years ago. Image courtesy of imperiatrading.com.

Port Richmond is a small hamlet on the northern coast of Staten Island. Bordering the Kill Van Kull, it was once a vibrant harbor town, making its money from shipbuilding and ferrying people to and from the transportation hub. For two hundred years prior to the Staten Island Expressway (and more importantly the Verrazano Bridge), it connected routes leading to and from what are today Bayonne, Perth Amboy, inland Staten Island and its North Shore, and other points south and west of New York City.

This cliff-face, found near the George Washington Bridge, is one of the more impressive parts of the Palisades Sill. Unfortunately, due to urban development, few traces of it remain in Staten Island (other than a slight elevation increase). Image courtesy of jschumacher.typepad.com.

Much of Port Richmond sits on a narrow stretch of what is known geologically as the ‘Palisades Sill,’ surrounded by the Brunswick and Stockton Geologic Formations, which are from a similar time and history. The 200-million-year-old Palisades Sill, an underground upheaval, extends down from Newburgh to New Jersey; it is most visible at the Palisades, a cliff-face extending north from the George Washington Bridge for about twenty miles. Its route can be roughly traced on the Palisades Interstate Parkway. Sections of the Palisades Sill can also be seen near the Bayonne Bridge, albeit less impressively. Much of Newark Bay and the Lower Hudson River Valley follow the formation’s undersea counterparts to the ocean – or rather, a lake just inland from the ocean, bottled in by the isthmus crossing the Narrows. When glacial moraine broke through the Narrows about 10,000 years ago, the draining of the ‘dammed’ lake left the waterways we know today.

Looking across the river from Bayonne, one would never expect that Port Richmond sits on a subterranean ridge, much less part of the Palisades. Image courtesy of wikimedia.com.

Despite the fact that the town sits on top of a major geological formation, there are few changes in terrain to indicate such. The town is at or near sea level, with the inland areas slightly higher in elevation; elevation ranges between 20 and 60 feet, topping out at 150 feet nearing Clove Lakes. Aside from the geology, barely noticeable at the surface, Port Richmond’s topography is consistent with what would be found on the Atlantic Coastal Plain – near sea level, with little to no topographical change. We would assume that if left in its natural state, Port Richmond’s landscape would begin to mimic that of undeveloped sections across the river, with moderate-to-dense woodland. The Kill Van Kull was the lynchpin for the survival of Port Richmond; it is estimated (by the Port Authority) that 12% of all containers that enter or depart the United States transit this strait. In this respect, the Bayonne Bridge (foreground) is to be raised by fifty feet to permit passage of larger vessels. Image taken from fieldwork. Port Elizabeth, NJ, contains some of the largest dockyards in the United States; they are under the auspices of the Port Authority of New York and New Jersey. Port Elizabeth is now what Port Richmond once was - a thriving industrial center wholly dependent on the Kill Van Kull for its survival. Image taken from fieldwork.

Port Richmond is named for the natural harbor that it forms along the Kill Van Kull, an inlet connecting Lower New York Bay in the east to Newark Bay in the west. One of the only two routes leading to New Jersey’s extensive dockyards, it is unquestionably one of the most heavily-traveled waterways in New York Harbor. [The other route is along Arthur Kill on the west coast of Staten Island.] New Jersey is on the mainland, and therefore a better transit hub logistically than Staten Island would have made; New Jersey is therefore home to the impressive slips of Port Elizabeth and Bayonne, among others. Due to this heavy maritime traffic, the Kill Van Kull needs to be consistently dredged, and a plan to raise the Bayonne Bridge to accommodate larger ships is already being undertaken. Yet, Port Richmond was a port before this infrastructure was in place; it forms a crescent shape along the water, providing a cove for small craft seeking shelter from the tidal strait. 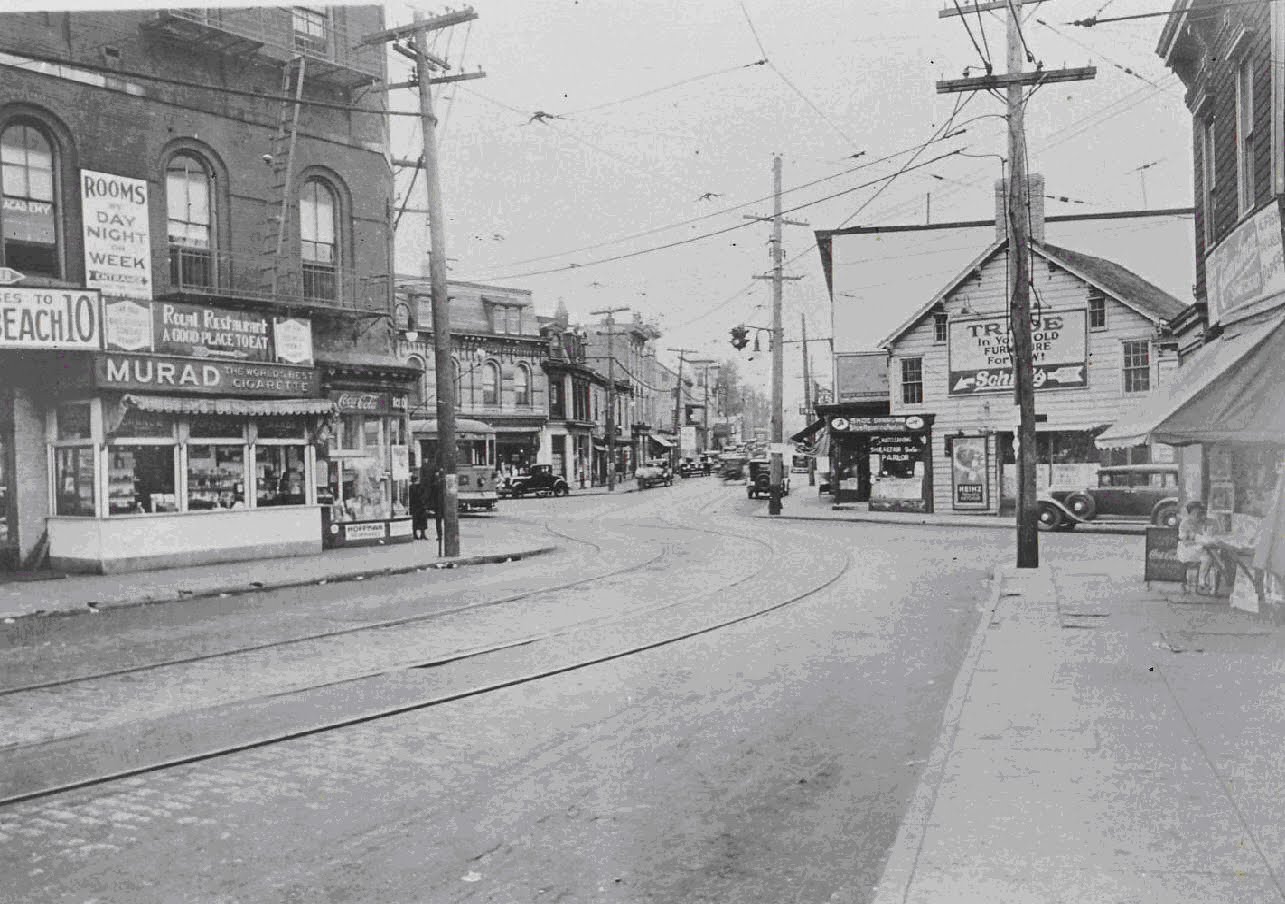 Port Richmond in its heyday, with what made it wealthy in the center of the photograph. The lack of elevation change coupled with the port allowed for as many trolley lines as there were docks. Image courtesy of 2.bp.blogspot.com. Port Richmond's underbelly isn't pretty, but it's symbolic of how desolate the town has become when the ferries moved to St. George or the Bayonne Bridge and the shipyards were moved to New Jersey. Image courtesy of streetsblog.org.

Geographically and geologically, Port Richmond was always a natural harbor. As a transportation hub, it could provide ferries to Bergen Point daily, and quickly prospered economically; its advantages were touted for almost three hundred years. It is a pity that Port Richmond has sunken under the pressure of large dockyards on the mainland and the lack of demand for ferry service, shipping, or shopping; this has occurred continuously for fifty years, when the opening of the Staten Island Expressway and the Verrazano Bridge took the traffic away from the area. Port Richmond became impoverished and forgotten; today, with the exception of Faber Park, the once-proud waterfront has turned into an industrial zone. It is disconcerting, as the little town had great promise since its inception. However, unless people remember what the little harbor was good for, the town will forever remain a desolate slice of civilization.

One Response to Port Richmond