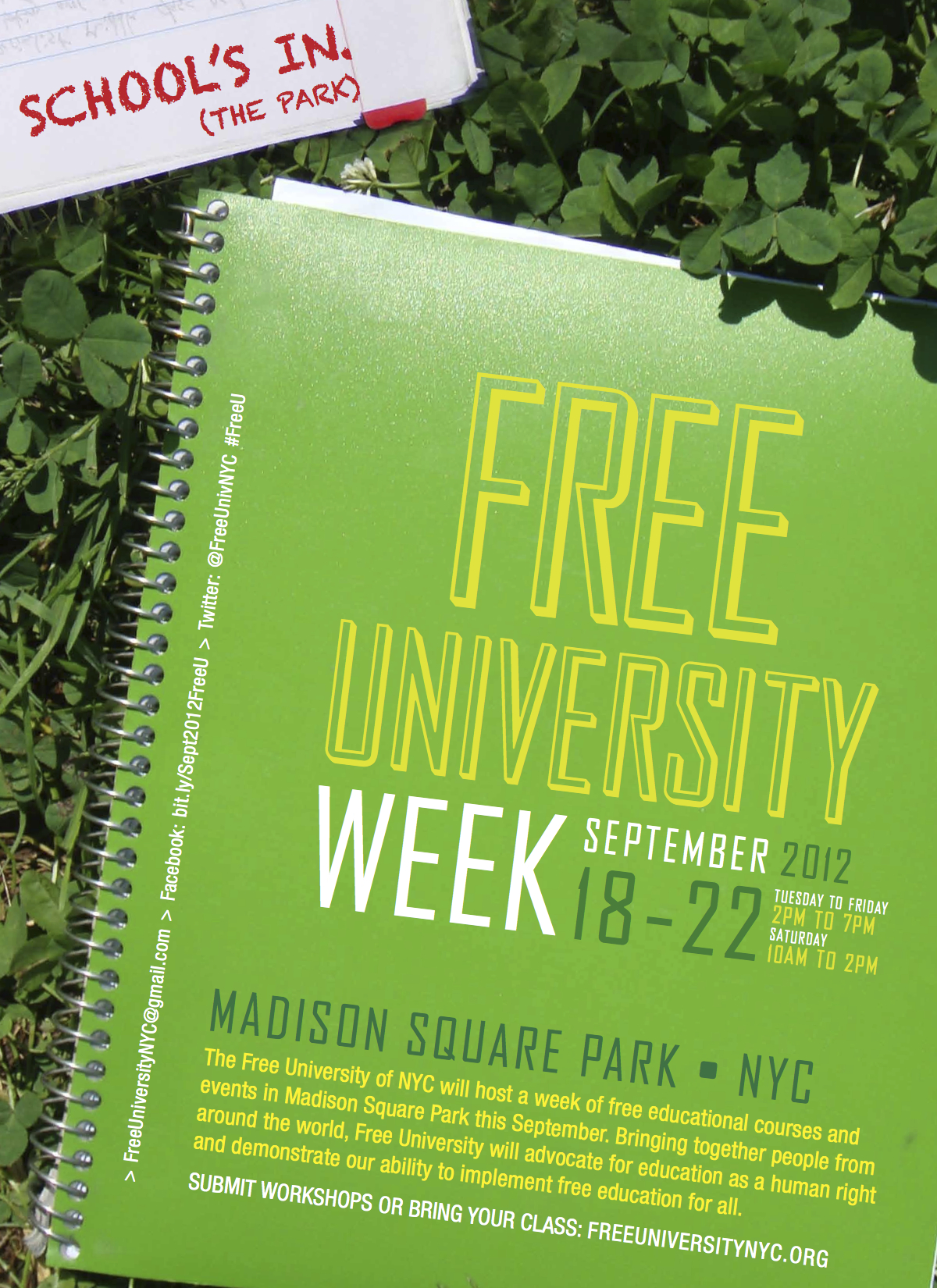 Madison Square Park became the center of an event called the Free University. Affiliated with the Occupy movement, the classes, both taught and attended by the public, were intended to be an “experiment in radical education,” according to the event’s website.

Over 160 classes were taught and many focused on social and economic justice, like “Class Struggle, Socialism, and Revolution,” “Movement-Building and Nonviolent Conflict” and the very popular “Strike Debt: the History of Debt Resistance.” There were also classes on screen printing, yoga, and dating in New York City. A group practicing capoeira, a Brazilian style of movement, drew a crowd for two hours on Friday as children and adults danced together in the main plaza. Other classes met in groups from two to thirty people all over the grass and walkways of Madison Square Park. Some of the classes were lectures, some were discussions,  A class called “Social Justice Musicianship Certificate Program” featured eleven people playing guitars together.

Gregory Rosenthal, a PhD candidate at SUNY Stonybrook, who was involved in organizing the event, said that teachers could fill out a form ahead of time to get their classes on a printed schedule, or simply show up and request to have their class advertised on one of the whiteboards throughout the park. When asked about the qualifications of the teachers, Rosenthal replied, “We don’t ask; it doesn’t matter.”

Priya Elisabeth Shajun, a Macaulay student at City who attended a class called “Developing a Shared Understanding of Intimate Partner and Sexual Violence” said she enjoyed her time at the Free U. She said the class was “very different from a class at school. “I thought oh, [the teacher’s] just going to teach — she’s going to talk. But it was very discussion based.” Shajun also supported the principles underlying the Free U. “Education shouldn’t have to be something you pay for, it’s a basic right,” she said.

According to Mike Stivers, a Macaulay student who was involved in organizing the event, the Free University week was created in response to systems of education “becoming less and less free and less and less accessible to more types of people.”

Rosenthal highlighted the problem of students going into debt to pay for higher education, hoping that their future earnings will be enough to pay it off. Rosenthal felt that this debt “makes your four years in college like you’re going to a casino. And it’s a
risky gamble.” Further, he echoed Stivers on the increasing lack of access to education, speaking of those who could not take on debt or had to work full time.

There isn’t one clear vision for the future of the Free University. Stivers described the dilemma between reforming the current system or creating something completely new. People who want to reform the current system want to do it through a city-wide student union that would be a “structure for organizing CUNY students to fight for broad-based issues” said Rosenthal.

The other idea is that the Free University itself could eventually become an alternative to the traditional model of higher education. “We’d like to create a free option, a truly public university as good or better than a traditional four year education,” said Rosenthal. On the problem of how to get teachers to teach entire semesters without being paid, Rosenthal didn’t have the answer just yet. “There will be things we have to work out, but I think we can. I don’t think it’s utopian,” he said.

For now, the Free University has smaller, but targeted goals. It is a “chance to provide people with those classes that they wouldn’t have gotten otherwise. I’ve never seen Anarchism 101 in a college class, and we had that,” said Stivers, “For the immediate future, [Free U] functions as a supplement, a necessary supplement.”

To learn more about the Free University, visit their website.