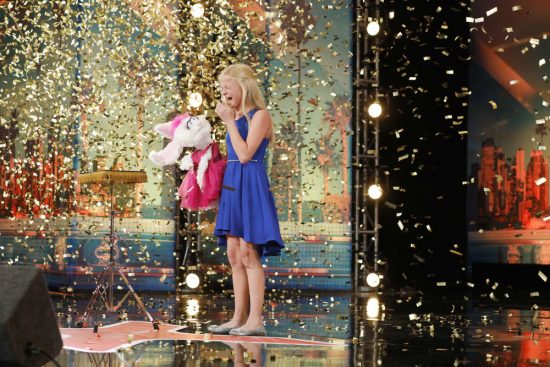 Season 12 of America’s Got Talent (AGT) has concluded, and thanks to the results, the golden buzzer appears to finally be building some momentum.

While AGT’s last three years consisted of golden buzzer winners, what’s even more impressive are the volume of finalists who were granted golden buzzers. This season’s runner-up, 10-year-old singer Angelica Hale, was the recipient of guest judge Chris Hardwick in Week 1 of Judge Cuts. Aside from Farmer and Hale, golden buzzer acts who advanced to the Season 12 finale were: Light Balance (auditions), Mandy Harvey (auditions) and Chase Goehring (judge cuts). In total, the finale had five golden buzzer recipients (half of 10 acts), which matches last year’s amount.

Season 10’s Finale included four golden buzzer recipients. A majority of them — three out of the four — including Zerdin got the designation from Judge Cuts.

Plus, as a concept that’s still fairly recent (Season 12 is its fourth year in place), three straight years of success is just the kick the show needs to demonstrate the golden buzzer’s relevancy. These past three seasons, with such high numbers of golden buzzer finalists, have proven the buzzer’s use on remarkably talented acts. That wasn’t always the case though.

In its debut season, the golden buzzer was only used twice. Howard Stern used it for Dustin’s Dojo, a comedic martial arts act. Howie Mandel used it for Emmanuel & Phillip Hudson, a comedy act that rapped about “ratchet” girls in its audition. It’s important to note both acts would not have advanced without the golden buzzer, which made the buzzer serve a purpose more along the lines of “saving” an act. Both acts were eliminated at judge cuts, making the golden buzzer’s commencement year its least successful.