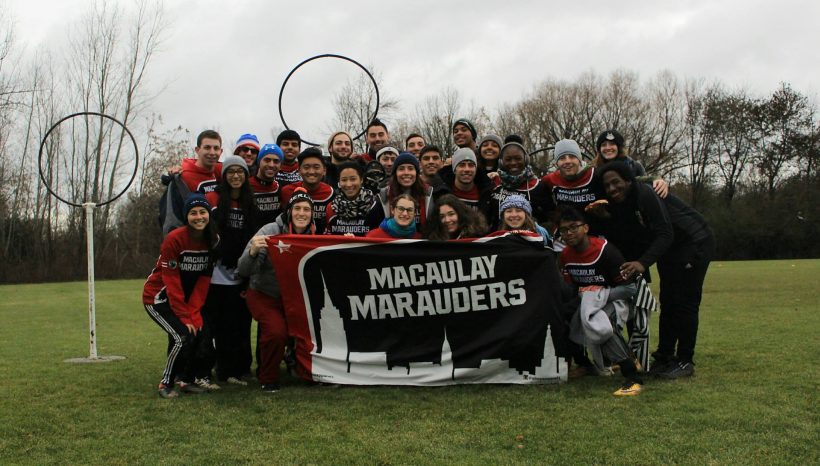 The golden snitch is feet away from you. Upon seeing it, you lunge forward on your broomstick. The golden snitch is inches away from you.Your fingers graze its smooth, golden surface. Then you fall onto a bed of vibrant green grass-just like Harry Potter did in his first Quidditch match. But once you realize that the golden snitch is not metallic, but woolen, and that your feet never left the green bed.  You slowly fathom the idea that you are not a witch or wizard hovering over the Hogwarts Quidditch Pitch, but a muggle playing at the New York East River Park.

Muggle Quidditch has become an internationally recognized sport. United States (U.S.) Quidditch, the national governing body for the sport of Quidditch, defines it as a “mixed gender contact sport with a unique mix of elements from rugby,dodgeball, and tag.” In the United States, over two hundred Quidditch teams are registered with U.S. Quidditch. One of these teams is the Macaulay Marauders.

Like Quidditch from the wizarding world, Muggle Quidditch has one seeker, three chasers, one keeper, and two beaters.There are a maximum of twenty-one players on the roster with three chasers, one keeper, and two beaters on the pitch at a time. When the snitch-a runner dressed in yellow with a velcro tail-is released, the seeker enters the pitch as well.

A typical practice for the Macaulay Marauders kicks off with full team warmups and stretches. The team then splits up into positional groups and focuses on skill drills for that particular position. While the beaters work on throwing accuracy, catching and dodging beats, and being able to make multiple quick beats, the chasers and keepers focus on catching and passing the quaffle in addition to tackling and defensive positioning drills. Following these activities, the Macaulay Marauders perform joint drills in which smaller groups of players will practice specific strategies of situations they might see in the game. Finally, there is a full team scrimmage to simulate real game situations.

The team has faced great changes from last year. According to Treasurer Samura Lugo, “at the end of last year, a few of our most talented players graduated, so we were unsure what the 2017-2018 season would look like.” But due to an influx of “stellar,” “dedicated”, and “new” rookies, the Macaulay Marauders has had a solid roster lineup this season and are confident in their ability as a team.

So far, the season has been successful, with a 10-9 record that culminated in them qualifying for the national champs. The Northeast regional champs, which was held in Rochester, resulted in the Macaulay Marauders beating Rochester Institute of Technology, a team that “played very aggressively and injured a few” players. In reference to this game,  Coach Alvin Arnold said that their “team showed the grit and scrappiness to pull out a win in the mud and snow.” The game terminated with a snitch catch from head captain Ben Fernandez.

In addition to their hard work, the Macaulay Marauders’ success can be attributed to their team dynamics. The team is welcoming to both Harry Potter fans and people who are just looking for a sense of community. Freshman Lila Tabor said “Joining the team was one of the best decisions I’ve made. I’ve learned so much about the importance of sticking with your teammates no matter what.” Although she identifies as a female, Samara Lugo uses the term non-male player to show that the “Quidditch community and rules recognize and include players of all gender identities.” Her team “is Ohana,” and they “all support and love each other.”

Update 5/10/19: The Macaulay Marauders wrote up a guide about Quidditch to help beginners and teach them how to get started. You can find it here.