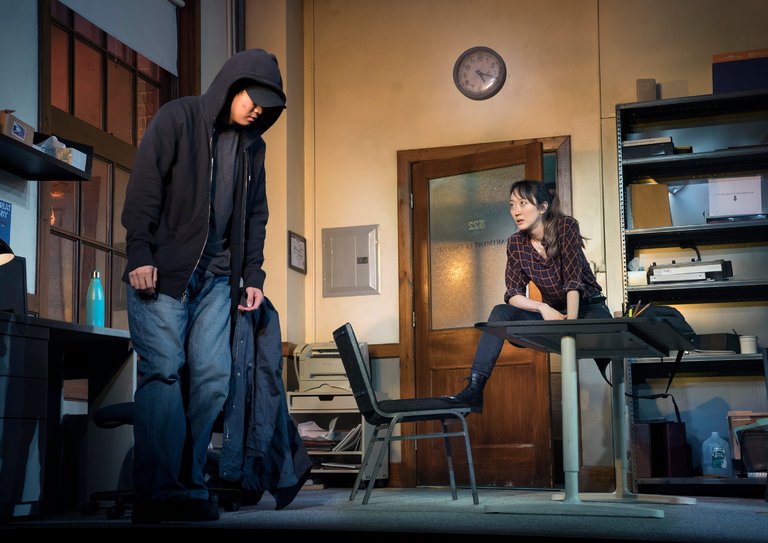 Julia Cho’s Office Hour is a poignant depiction of gun control, Asian American race relations, and mental health. Shown in the Public Theatre (closing night is on December 3), the play is a response to the 2007 Virginia Tech shooting and certainly succeeds in recreating an unnerving atmosphere.

The plot involves an adjunct English Professor named Gina (Sue Jean Kim) attempting to speak to a disturbed student in her class. Other professors in the department coax her to speak to him due to her sharing his Asian background; they fear he is a perfect candidate for a school shooter. The boy, named Dennis (Ki Hong Lee), was known for his brooding demeanor and violent writing assignments, involving rape, pedophilia, incest, necrophilia, and murder. As a character, Gina’s overall objective is to get Dennis to relinquish his animosity and speak freely about his feelings. She desperately attempts to prove to him that she fathoms his silence and hatred, even harping on the inability of first generation Americans to fully assimilate.

In the very first scene, the minor characters David (Greg Keller) and Genevieve (Adeola Role) do a poor job of delivering their lines. Though the scene has the expositional purpose of describing Dennis’ character as a student, the dialogue was highly unnatural. As an audience member, I could tell the scene was meant to send chills down my spine, but I could not identify Adeola Role’s choices as an actor. It felt as if she was delivering the lines to get them out of the way, perhaps indicating without having any inner justification. The entire first scene also took place with all the characters sitting at a coffee table, not making much use of the space either than taking sips of their drinks. I was in the second row of the audience and very close to the stage, and Gina’s position was away from the audience, making it difficult to see her and understand her lines.

Nonetheless, the play develops nicely. The specific strobe-like lighting and dissonant background music adds to the drama. In the second act, Gina nervously awaits Dennis, who she calls in during her office hours to talk about his work. She does a great job of physicalizing her emotions, moving back and forth frantically and changing the dynamics of her voice. Dennis also does a great job of behaving awkwardly, as if he were numb and unaware of Gina’s existence. His cataclysmic bursts of anger later on are also frightening and help drive the plot to the end. One of his common reiterations involves calling everyday people “skulls,” or empty, inhuman shells. Both actors seamlessly oscillate between very different reactions and circumstances, especially considering the play’s unique structure.

Interspersed between the scenes of the play are imagined scenarios in which one character shoots another. For example, Gina might shoot Dennis in one scene, but within the next second, things go back to normal, indicating Gina imagined the previous actions. This definitely breaks the mold of a traditional play, moving into a more modernistic style; these breaks are what make the play worth watching. There is a climax in which there is an entire gun montage, with continuous sounds of bullets and sirens, in addition to flashing lights. The play is not for the faint-hearted, as I even felt myself covering my ears in trepidation.

In essence, Office Hour successfully delivers an alarming message regarding the psychology behind disturbed students and the importance of administrators in deterring their behavior. Furthermore, it’s a unique commentary on the importance of stricter gun control laws, bringing the issue into life by using such intense shooting sounds. I can almost still hear the bullets reverberating in my ears.