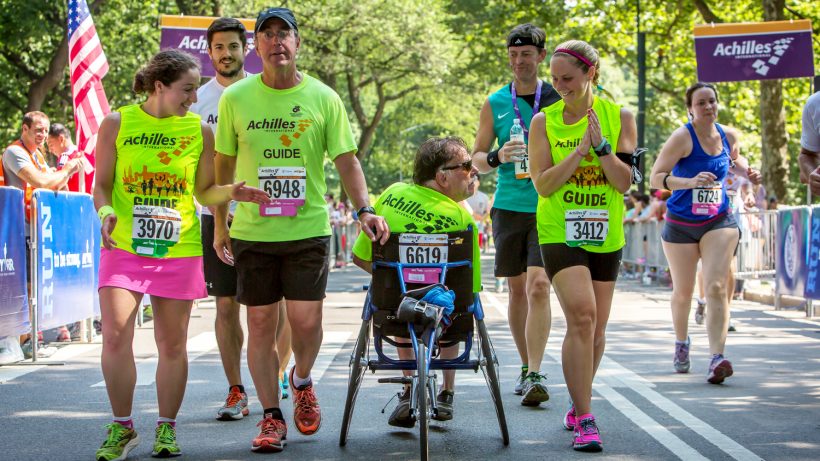 When most people think of Achilles, they visualize an ancient Greek hero springing into combat from Homer’s The Iliad. Achilles appeared invincible with an unparalleled constitution. However, he was not, and his demise was centered around his heel.

As a knee amputee, Richard “Dick” Traum had such an Achilles heel. But, his Achilles heel did not hinder his running career. In 1976, he became the first runner with a prosthetic leg to finish the New York City marathon. On January 9, 1983, Dick Traum founded Achilles International, a running organization that engages disabled participants in running workouts with the goal of improving their aerobic capacity, function and quality of life. Traum aimed to “make running for people with disabilities a normal thing.”

Participants in Achilles International span all age groups and have a wide range of disabilities, including but not limited to blindness, multiple sclerosis and limb loss. Volunteers cater to each member’s needs, using a tether and noting cracks on the path if they are dealing with a blind participant or devising a run/walk plan for a participant who is new to running. Volunteers serve as guides in races such as the TCS New York City Marathon, The United Airlines New York City Half Marathon and the Brooklyn Half Marathon. The Achilles Hope & Possibility four-mile run — Achilles’ main fundraising event — includes athletes of all abilities, takes place in Central Park and attracts over 5,500 athletes.

The New York City Chapter meets every Tuesday and Saturday at the intersection of 90th Street and 5th Avenue. Many members don neon-colored attire as they run through Central Park. The next time you see an Achilles athlete on your morning run through Central Park, show your support with a cheer, and you will be reciprocated with a smile.