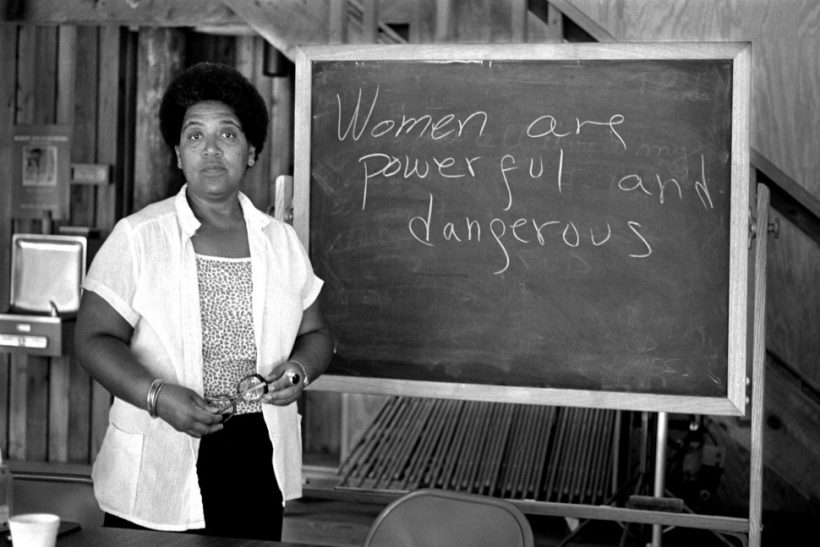 In celebration of Women’s History Month, it is important to look back at the female pioneers who have paved the way in fields such as science, mathematics, literature, engineering, medicine, etc. They have pried open previously locked doors of opportunities that are now available to young girls aspiring to do great things.

Last semester, in my narrative medicine class, I learned about the life story and struggles of a woman I have been in awe of ever since. She was a symbol of resilience who tackled racism and homophobia straight on with her emotionally-charged rhetoric. Her poems resonated with individuals from all backgrounds who felt persecuted for the very qualities that made them unique. She was also a proud member of the CUNY community.

Fellow Hunter College alumna, Audre Lorde, never had it easy in life. As a black lesbian feminist poet, she was always facing some sort of discrimination or prejudice in both her professional and personal life. She grew up in New York City to Caribbean immigrants and found it difficult to maintain a loving, stable relationship with her parents. Writing poems throughout high school and college provided a young Lorde with an outlet to spread her anger and passionate feelings about injustices within her community. Instead of choosing to submit to societal stereotypes, Lorde sought to break barriers through her poetry in order to make people question labels such as “black” and “lesbian.” Her unique opinions on Black identity and theories on womanism and feminism placed a magnifying glass on deeply-rooted racism, sexism and homophobia present within American society.

Lorde was not all about just talk, however. Her bold words manifested themselves into action as she actively fought for various civil rights issues abroad. In the 1980s, she founded the Sisterhood in Support of Sister (SISA) in South Africa to lend support to black women dealing with the adverse effects of apartheid. She also served as a professor in West Berlin at the Free University of Berlin and encouraged the women of Germany to speak up against divisive national issues.

The massive impact she played in Germany was showcased in a documentary by Dagmar Schultz called “Audre Lorde: The Berlin Years 1984-1992.” The documentary won accolades at various film festivals and increased awareness of Lorde’s emphasis on the creation of an Afro-German identity.

Lorde was very much involved in the CUNY community as well. Throughout her successful career, she served as a professor at Lehman College, John Jay College of Criminal Justice, and finally, her alma mater, Hunter College.

Her strength in teaching and poetry stemmed from her ability to place her own life experiences and hardships into her work. For example, in The Cancer Journals, Lorde gives the reader a painful glimpse into her years of battling metastatic breast cancer. The rhetoric in the autobiography is real and raw. It is disturbing to read, but I was taken aback by the sheer optimism and hope Lorde had during the darkest of times. Nonetheless, it is an important novel that sheds light on the illness narrative through themes of victimization, beauty, survival and stereotypes.

Much of Lorde’s arguments and beliefs are timeless and tackle the objectification and inequality women face everyday. In The Cancer Journals, she states that, “As women we were raised to fear,” and society perpetuates this fear through the objectification of the female body. Breast cancer survivors are pushed to hide behind prosthetics in order to make themselves feel “normal” or beautiful again. Through Lorde’s eyes, this undermines the ability of a woman to move on by forcing her to dwell on her appearance. A woman is no less beautiful or worthy because she has one breast. In fact, Lorde’s painful experience and mastectomy allowed her to redefine her life and grow as an individual.

Despite the grim prognosis and the immense pain Lorde endured, her poetry and writing allowed her to make sense of her condition. In some ways, it may have also provided her with a coping mechanism as she prepared for her final days.

As a black lesbian feminist poet, Lorde constantly found herself struggling to find her place in a world that never quite felt like home. However, she found herself connecting with women from all different walks of life, united in the same battle against cancer. What is important is that she realized women needed to speak up against things in order to incite change; silence was not going to protect them. I can imagine she would be very proud and supportive toward the National Women’s March this past January.

As women, we still have a long way to go regarding controversial issues such as sexual assault, abortion, pay equality and gender equality. Some countries have advanced more than others, but it is through action and awareness that we tackle these problems head on. Lorde played a pivotal role in starting this conversation, and her death should not signal the end of it. Let us use motivational woman like her in order to inspire the female leaders of tomorrow. And above all, we should always remember: women are powerful and dangerous.

To learn more about Audre and her lasting impact on the Hunter community visit: http://www.hunter.cuny.edu/wgs

4 thoughts on “Audre Lorde: A Powerful Woman and Her Poetry”