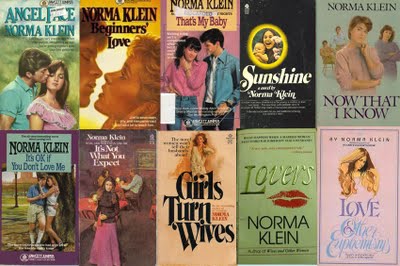 I learned about Norma Klein last summer from an old book of articles that had been published in Bitch magazine. Apparently, this lifelong New Yorker’s young adult novels had inspired the curiosity of a generation of girls. Apparently, she didn’t hold back in her subject matter—divorce, sexual orientation, (premarital!) sex, affairs and unwanted pregnancy were all on the table, even for young adults, even when dinosaurs were roaming the earth in the 70s and 80s! Of course her books were banned, but that just makes the whole thing all the more scrumptious.

Wondering where the hell Klein had been when I was growing up, I went on the hunt for her books. Surprisingly, I had no luck at my extensive local library. I might’ve been able to borrow one from another Long Island library through interloan request, but I would be going to college soon, and my interloan request might not be met in time. Even the New York Public Library does not allow patrons to check out her books. So you best believe that when I got to Hunter College and found that they had a couple of old Norma Klein books, I took the elevator down to East B2 and spun the spinny things to separate the aisles with the hope that I might finally get ahold of her books. Alas, the book I was looking for was not there, so I filled in a little piece of paper upstairs and, to my delight, they got the book to me soon. And that’s how it all started.

A divorced woman who goes to clown school; an overweight cancer researcher delighted with her niece’s genitals; a high school student who marries her chemistry teacher; such is the rich diversity of Klein’s always whimsical, always heartwarming protagonists. The writer’s way of seeing the world, as expressed through amazing one-liners — “I’m crazy about abortions, I could get abortions every day of the week!” — is something truly refreshing and life-affirming. Although it may not be entirely believable that all of these characters can afford their own Manhattan apartments, the reader can indulge in the impracticality of Klein’s universe. Even the teenage mom with the terminal disease from Klein’s most famous novel Sunshine made me laugh out loud.

If you used a soft f, you could even call the Barnard graduate a feminist, due to her portrayal of such a vast array of female characters: opinionated, intelligent women with their own sexualities and their own preferences as to their futures, as to whether they would like to get married, as to whether they would like to have children. “I wonder why in books they make [sex] sound so awful, always talking about thrusting and things like that,” comments Maggie, the Cornell-bound high school senior and relentless feminist who stars in Love is One of the Choices. In the world of Norma Klein, nothing is taboo, and there is never anything to be ashamed of.

Unfortunately, the author died in 1989 when she was only 50 years old, leaving behind two daughters and a husband who has since passed away. Fortunately, her large body of work lives on, if only in the forgotten nooks and crannies of some dusty library basements. To this day, her hidden artistic treasure is the perfect antidote to tragedy, misery, and yes—womanhood.