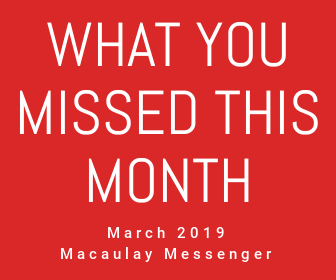 We can all agree: sometimes the news can be overwhelming. Due to the sensationalism of today’s media, it can be difficult to parse through stories and tell which are important and which aren’t. So, I’ve handpicked three of the most important stories you may have missed this month:

Robert Mueller III concluded his investigation into whether or not President Trump’s campaign coordinated with Russia in the 2016 elections. There are a lot of pertinent parts to this large story, so I wrote a separate article to cover it. Check it out here, or by clicking the image above.

To Brexit, Or Not To Brexit?:

In an off-brand shift to European news, Theresa May seemingly cannot get any Brexit deal to gain traction in Parliament. For the unaware, the United Kingdom held a referendum in March of 2017 on whether the UK would leave the European Union, and become a sovereign state. After a long campaigning period, the country voted in the affirmative, a choice that shocked the nation, the EU, and the world.

After David Cameron (the previous Prime Minister) left office, Theresa May (the current Prime Minister), was left to pick up the pieces. What ensued was a two year long battle on exactly how the UK would leave the EU. Would there be a “hard” Brexit, where the UK would no longer be a member state, and leave the EU’s Single Market and Customs Union (an intercontinental trade agreement)? Or would there be a “soft” Brexit, where the UK would remain in the EU’s Economic Zone? Of course this is a bunch of jargon, but the important question was: how independent would the newly independent UK be?

It seems Parliament and the Prime Minister can’t seem to agree. May’s proposal was struck down a number of times in Parliament and Speaker John Bercow determined that in order to continue to vote on Brexit resolutions, the new plan must be substantially different from the old one. There were several “no confidence” votes in Parliament, a vote wherein the Parliament can recall the Prime Minister, and still there are calls for May to resign. In face, May suggested that she may resign after Brexit is done and settled. A popular idea alternative to a deal, mostly promoted by the rival Labour leader Jeremy Corbyn, is to simply have a second referendum on Brexit. The Conservative May opposed this idea, laughing it off in the past, but is now saying it “deserves to be seriously considered.”

The UK was scheduled to leave the EU on March 29th, regardless of whether they reached a deal, but the EU has permitted the UK two more weeks to orient itself. Predictions of what happen next are pure speculation; we are all cursed to live in interesting times.

Here’s something that may be a surprise to many, or known too well by others: New York City’s specialized school system is incredibly inequitable. This inequity was highlighted when it was revealed that of the 895 students accepted into Stuyvesant High School in Manhattan, only seven black students were offered seats. This number seems huge when compared to the fact that Staten Island Tech only offered one black student a seat.

This is shocking yes, but is a symptom of a much larger problem. Our education system is an inherently unequal one. An important fact about the system that not many people know is that school funding is primarily determined through property taxes. Of course, there are other funding sources, but this core funding method leaves working class and poverty-stricken kids in the dust.

If a child’s school can’t afford the newest textbooks, or the newest technology, or the best teachers, how can a child be expected to succeed? How can we reasonably expect that a child will get a good education when one simply cannot be provided to them? This is the key to understanding why the disparity exists in specialized high schools.

In the 2019 admission year, 51.1% of specialized school offers went to Asian students, and 28.5% went to white students, while 6.6% went to Latinx students, and 4.0% went to black students. We’ve got a long way to go to repair an inherently broken system.