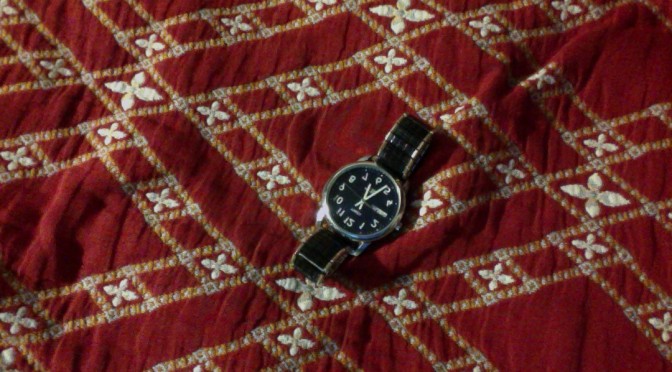 Marjorie Holloway, better knows as Muma(pronounced muh-muh) is where this tale begins. Muma is a short, vibrant, hysterical lady who speaks her mind with little remorse and a thick accent. Born in Barbados and raised there, she grew up with 2 sisters who later died before having children. Muma went to school and worked in Barbados for most of her life. She lived in her mother’s house on a road called Bibby’s Lane, near a gulley where monkeys lived. She was also raised to be tough and to have a strong body. In Barbados, glass, bottle caps, and sharp rocks littered the ground. Yet she walked on them barefoot without a single complaint; talk about tough. When she was around 20 or 21 she met my grandfather Vincent while he was riding his bike to work one day and they got together. After being together for a while, they had 3 children: Tyrone, Sandra, and Yvette. They were all raised similarly to Muma and were raised in Barbados, until Sandra wanted a change in her life; this begins part 2 of our story.

At the age of 14, Sandra, my mother, left Barbados to go to America in order to make a better living for herself, and to become a doctor.  My mother is an intellectual, loud person. I would even say that she’s tougher than my grandmother. My mom loves her family, and doesn’t take crap from anyone, under any circumstances. She went to high school in Manhattan and got her Associates Degree at BMCC. Then she took a couple of years to go travel to different places in the U.S.  A couple years later my mother went to 8 years of medical school in order to become a registered nurse, in order to help others.  She’s been in the field for many years and works hard every day. In around 1990, my mother got an internship at the esteemed Presbyterian Hospital Center in Washington Heights, where she met my father, Glendon.

My father was born and raised in Costa Rica, speaking his native language of Spanish. He grew up with his abusive, hateful grandmother who always beat him and gave him problems. He wanted to be the opposite of her as an adult and he was. Not once did he ever hit me in my entire life, because he didn’t want me to relive what he went through. He was on his soccer team as a child and in turn taught me how to play when I was a kid. He left Costa Rica to come to America at the age of 19 and has been here ever since, pursuing a career in Health as well. My father, like my mother is loud and aggressive at times, he hates being taken advantage of by others. Anyway, they hit it off and in 1995 they adopted me as their child, Kwan Stevie Alberto Smith Holloway.

Now we have finally arrived at the third part of our story, which is about me, my culture, and it’s effects on me as a person. My name is Kwan if you didn’t know already and I’m Bajan and Costa Rican. I lived in Washington Heights until I was 15, when I moved to Brooklyn. Washington Heights is my home; I know it like the back of my hand. I was raised with mostly Bajan culture as a child. My parents never really forced their values and culture on me; I always chose to immerse myself in these cultures because I liked what they were about. I picked up my Bajan accent by imitating my grandmother as a child. As a child, she made me listen to a lot of reggae music as a kid and that reflects in my some of my musical taste. I love Sean Paul and the majority of his music, always makes me think of my grandma and the festival they hold in Barbados called Crop Over, where they have parades of people dancing in vibrant colors with reggae blasting to celebrate the sugar cane harvest of the year.  As a child I also grew up learning Spanish from my father who told me stories of his grandmother and how he would never hit me because he doesn’t think any child should have to grow up being abused. This had an enormous effect on me because I chose then and there that I wouldn’t use violence on my kids; I want to raise them with love and compassion. I also want to pass down the watch I got from my father, which symbolizes his immense love for me, and how he would never give up on me.

Another thing I get from my parents culture was the idea of working hard for what you want. When they were growing up they didn’t get anything easy, so I was raised so that I would work hard and not take things for granted. I work hard every day so that I can hang with my friends, pursue my dreams, and become the best possible me that ever existed.

Though I wasn’t always like this; I was actually quite the delinquent before high school. In the 6th and 7th grades my “friends” and I would go around and steal from stores, fight people, and never do work in class all because thought we were thugs. I was failing about 5 of my 8 classes, but I didn’t care because it was more important to live the thug life with my “friends”. I saw the thug life as a way to gain quick status with girls and other people. I was “cool” and back then that mattered way more then my grades. What mattered most was how others saw me, now who I was to myself. Then came the time in 8th grade when I started to turn my act around, but not as much as I would’ve liked. Over the summer between 8th and 9th grade, I met up with my best friend Gary and we reflected on our actions in middle school.  We spoke about how we would attain our dreams without putting in the hard work. Eventually we realized that hard work was the only way to our dreams and we both, right there and then, chose to change and do what needed to be done in order to secure our futures. From then on I chose to work hard in high school and come out a success. By tenth grade I realized that I needed to be me and I did just that, I became an outspoken, sarcastic guy who loved to have fun and be athletic. I’m a creation of my experiences; my parents taught me how to be good, and I learned of their cultures by watching them. I gained some of my own values because I didn’t want to be like my parents, I wanted to be my own person, and not a replica. I learned to work hard, and not to procrastinate on anything I do, put my all into everything. This is the Kwan you all know.