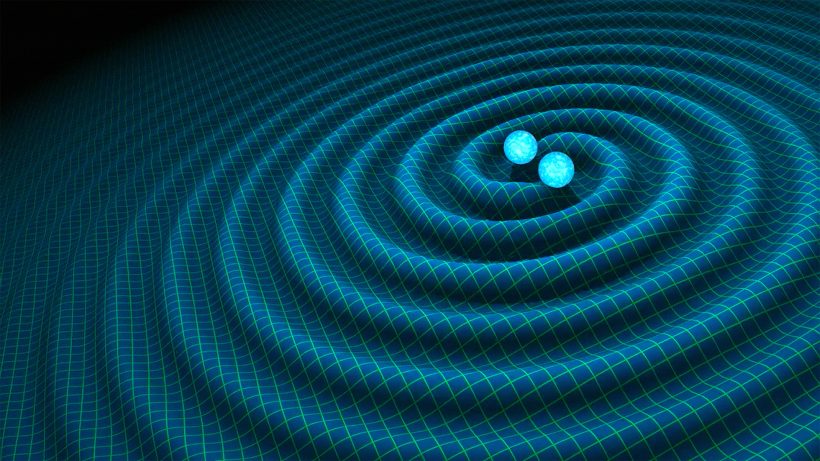 Gravitational waves have been a topic of discussion ever since Albert Einstein first introduced them in his theory of general relativity in 1916. Like much of his early work, gravitational waves were only talked about conceptually through mathematical principles and without empirical evidence of their existence. It took 60 years to prove their existence, and another 40 for the Laser Interferometer Gravitational-Wave Observatory (LIGO) to catch a first glimpse of the effects the waves have on spacetime.

In his paper, Einstein theorized that when two extremely dense and massive objects come into orbit of one another, they cause a ripple through spacetime that resembles the waves created by repeated movement on the surface of water. As the objects approach one another, they pull on each other with greater force and speed up. Since the effects of gravity do not travel faster than the speed of light, as the center of mass moves, the attractive forces take time to start pulling matter toward the center’s new position. If this dense center oscillates fast enough, a continuous wave-like change in the strength of the gravitational field may be observed.

Ever since LIGO’s opening two years ago, scientists have discovered five such events where the dense objects were black holes. This allowed for very powerful, but also very short measurements of the effects on the gravitational field. Unfortunately, black holes are very difficult to locate and impossible to observe in the visual spectrum, aside from the way in which they warp light. In other words, people had no way to study gravitational waves, aside from estimating their point of origin and acknowledging their existence.

On the morning of August 17, 2017, two of the three gravitational-wave observatories in our availability detected a ground-breaking occurrence. The two-week old Virgo and two LIGO detectors all signaled the merging of two massive objects. Unlike before, the detected gravitational waves kept strengthening for more than a minute, before dying out again. In the case of black hole collisions, gravitational waves are typically only detected for about one second, due to the small diameter that black holes are known to have. What made matters even more interesting is that astronomers overseeing the project identified a burst of energy from NASA’s Fermi gamma-ray telescope. The length of the signal in tandem with the burst of gamma rays signaled scientists that they were detecting the collision of objects much larger than a black hole. These objects were neutron stars, the leftovers of supernovae that hold the mass of the Sun in a diameter as wide as that of Earth.

Physicists at the LIGO and Virgo observatories rushed to pinpoint the origin of these signals. With the help of the three gravitational wave observatories, as well as the Fermi telescope, a small patch of the sky was identified as the origin of the phenomenon. By the time the sun set, the discovery announced last month was made. Unlike before, astronomers were able to point telescopes directly at the collision of two neutron stars and were able to observe and study a rare event that occurred more than 130 million years ago.

This event opened the door to a new era of astrophysics.

The ground-based observatories have now been disabled again in order to undergo upgrades, which will effectively double their sensitivity and detection range. With the addition of LISA, the European Space Agency’s planned space observatory, scientists will be able to detect waves of a much smaller frequency. When asked about the implications of this, Professor Stephen Smart explained that LISA would effectively be able to detect “supermassive black holes in the centres of galaxies [and] white-dwarf binaries in our own galaxy,” among other things. Neutron stars can now be studied extensively, and the state of matter prior to being turned into a black hole may be explored further.

At the time of publication, a lot more data is expected to be collected, as the outcome of the neutron-star collision becomes visible. Scientists across the world are expected to continue observing the object until post-merger signals are detected, which would hint at whether the product of the collision was another neutron star, or the two stars collapsed into themselves to form a black hole.