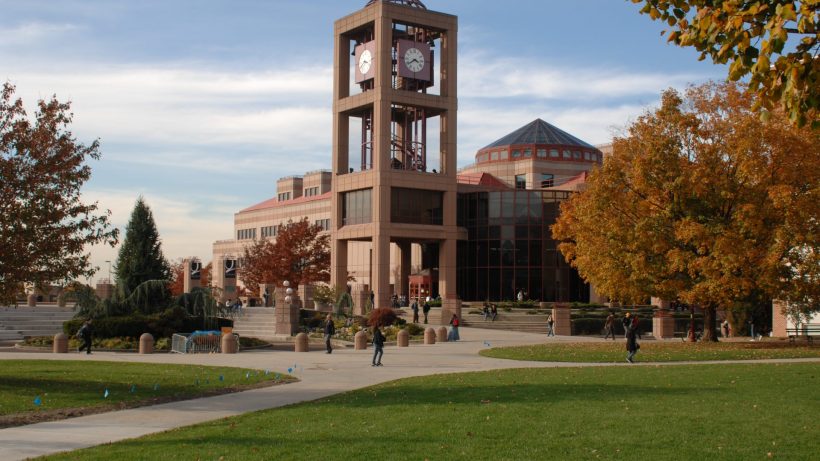 An untrained observer, upon visiting Queens College for the first time, may notice a few defining quirks: its location some ways away from mass transit, its clashing buildings (found in every style from Spanish architecture to 1980s window-less caves lined with carpet and linoleum tile), and its surprisingly green-for-a-CUNY campus. What goes unseen is the history archived in the mismatched buildings, behind the greenery.

Before Queens College was Queens College, the land was home to Jamaica Academy. Built in the early 19th century, the Academy was a one-room schoolhouse where poet Walt Whitman taught. Though dismissed after a few short months, likely due to his characteristic refusal discipline his students, his time spent at the Academy was commemorated at the time of the College’s opening in the 1930s. The building that stands near the location of the former academy, Kiely Hall, is a location where many English classes take place on campus today. It was named, for a period in the mid-20th century, Whitman Hall in order to commemorate the famous poet’s teaching on the same grounds all those years before. Though the name of the building has since changed, Whitman’s legacy is still acknowledged—albeit, in a less grand way—by a plaque laid on the ground outside of the former-Whitman Hall.

Throughout the 1960s, Queens College’s student body proved its hyper-political awareness through participation in the Civil Rights Movement, as well as anti-Vietnam protests. The involvement in civil rights work—from hosting speakers, to chapters of national organizations, to sending students to participate in watershed events like Freedom Summer—is well documented on the campus. Looking to the exterior of the Rosenthal Library, the Chaney-Goodman-Schwerner Clock Tower is one of the highest, most visible spots on the campus. Named after three young activists—one of whom was a Queens College student—murdered in Mississippi for their efforts to register African Americans to vote, the landmark pays tribute to the injustice carried out against them in their battle against racial injustices in the South.

Inside, the Rosenthal Library holds an extensive Civil Rights Archive containing the personal papers of movement leaders, involved students and participating clubs. Visiting the archive is an experience unlike any other: holding flyers announcing speeches with James Farmer in buildings still on campus, or reading the original applications of students volunteering to teach in Virginia and Alabama provides a connection to the past that cannot be attained through reading alone. Sifting through piles upon piles of paper bonds the present and the past—tradition and possibility together, on the same plane. Hidden in plain sight are countless testaments like these to the rich background of political activism by Queens College alumni.

After 80 years of teaching, “so that we may serve,” Queens College has transformed a great deal: no longer demographically resembling its inaugural class, the College is now a bastion of diversity in representing more than 170 countries across the student body. Changes that have occurred—both naturally with time and by conscious effort of students, faculty, and administrators alike—move toward a greater end of inclusion, diversity, and progression. However, roots should not be forgotten. The history of the College and its students warrants more recognition than is afforded in a simple plaque or unmarked library archive.

Growing with the changing world does not preclude present interaction with the past, but rather necessitates it. In times of trying politics, it is worth the world to remember those who came before.