The Show is Back On: The Return of Live Music After Two Years

Has Emily Mariko Found the Recipe for Success? 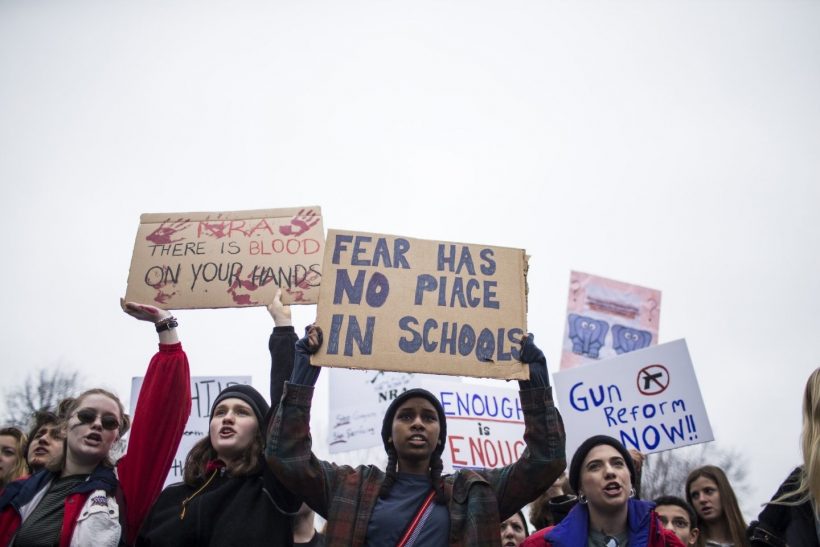 Valentine’s Day is usually associated with love and feelings of gratitude toward those we cherish. However, this joyous scene was a stark contrast from the one that unfolded at Stoneman Douglas High School in Parkland, Florida. On the afternoon of February 14, echoes of gunshots reverberated across the halls, and the high schoolers found themselves in a very grim reality. A reality that no adult or child alike should have to grapple with. A reality in which they came face-to-face with life and death in a gruesome mass shooting.

The gunman and former student, Nikolas Cruz, left 17 fatalities and 15 injured in his disastrous wake before he was arrested. The Parkland shooting quickly fell among the ranks of Columbine, Virginia Tech and Sandy Hook as one of the country’s deadliest school shootings. It has sparked a multi-faceted debate involving issues such as gun control, mental health awareness and legislature.

Cruz’s spree started around 2:20 PM during dismissal time. He entered the freshman building with an AR-15 and multiple magazines concealed in a bag. It became evident that he came with the premeditated intent to kill as many people as possible. He shot into approximately five to six classrooms, even returning to a few of them in an attempt to break in and kill more students. At around 2:28 PM, he was believed to have run outside alongside other students evacuating the scene. He was apprehended at 3:41 PM and was arrested without any conflict. The story broke out over major news platforms, with texts of trapped students causing parents and relatives to flock outside the school.

This timeline is crucial to investigators as they attempt to piece together Cruz’s motive for this heinous act. However, it is important that the public focuses on the stories of the victims as they advocate for gun control. The spotlight should not be on Cruz. It should be on victims and heroes of that day who followed protocol and tried their hardest to save lives. Among the dead include 17-year-old Nicholas Dworet, who had been recruited to the University of Indianapolis’s swim team, and 37-year-old assistant football coach, Aaron Feis, who threw himself in front of students to protect them from the bullets. A majority of the other victims were around 14 to 18 years of age and played key roles in their school community. These teenagers were driven individuals, some of whom were scholarship recipients, part of the school orchestra, marching band, volunteer organizations and sports teams.

The major controversy involving this particular incident stems from the fact that many students and police officials had been notified about Cruz’s suspicious and potentially dangerous behavior. According to the New York Times, prior to the shooting, Cruz “posted pictures of weapons and dead animals on social media.” He even went so far as to post a YouTube comment saying how he wanted to become a professional school shooter. This led many students to argue that Cruz’s rampage could have been prevented if authorities would have not only picked up on the tell-tale signs of his violent behavior, but actively helped him manage them.

There is a cyclical nature to this debate surrounding mass shootings that perpetuates the idea of complacency instead of action. While the community grieves, the nation sends out its condolences. Advocates fire up, saying this is why gun control needs to be more regulated. However, as time progresses, these shootings become boiled down into statistics and history. The public vows to never allow such a tragedy to happen again… until it does. These sentiments were also passionately echoed by senior Carly Novell who survived the incident. She states:

I just want people to stop talking about it and then not doing anything. People keep saying, your ‘thoughts and prayers’ and all of these things. But it doesn’t make a difference if nothing ever changes. This happens over and over again and people are dying. And it seems like it doesn’t matter because, like, what are thoughts and prayers going to do when people are already dead? … We didn’t know what was going on, but while we were in there, we were all still talking about gun control and how something needs to change.

There have been approximately 18 school shootings in the United States since the beginning of 2018. It is only March. This highlights a clear disconnect between the strong arguments of various activist groups and the actions, or lack thereof by Congress. Gun control is an issue that should transcend the disagreements of the two parties. The government and nation need to unite and look at the deeply rooted problems within our legislature that allow violent individuals to purchase guns so readily. Only after pinpointing the problem can we begin to propose and enact laws that advocate for regulating guns such as AR-15’s and running background and mental health checks on prospective buyers.

As a nation, we must band together to give strength and respect to all the families affected by this senseless act. Nowadays, the lockdown and safety drills done in schools are results of incidents like Parkland that shake communities to their core. No child believes their school will be the site of a mass shooting, and no child ever should. However, with these current laws, it is a disturbing reality parents, teachers and students must understand. By continuing to broadcast the hysteria in the media without actively trying to understand the heart of the problem, society is implying that this will continue to happen despite our best efforts to remedy it. Mental health issues and personal trauma are things that some people unfortunately deal with. It is when these issues manifest into violence that we need to draw the boundary and take action.

The question remains: What can the public and government do in order to prevent mass shootings?