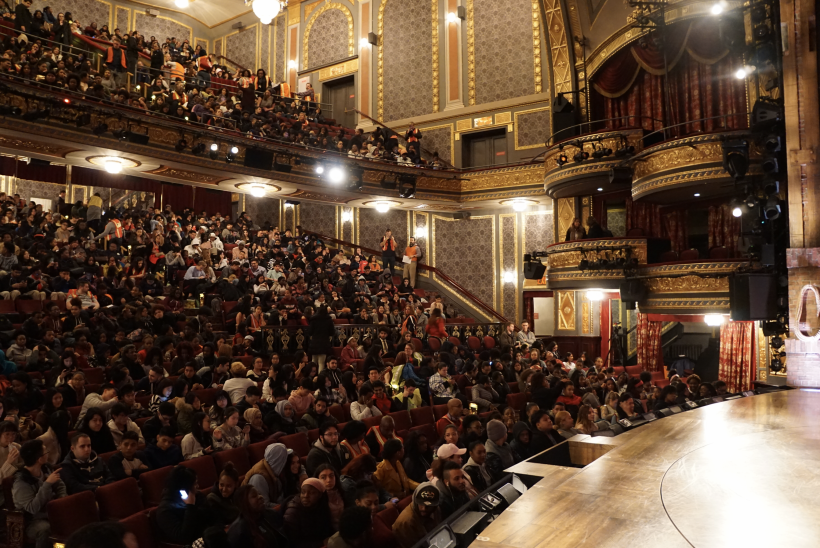 It is 9 A.M. on November 29, 2017. Most high school students are in class, struggling to stay awake during second period, the unintended result of a long night of homework and studying. But down on Broadway, students representing 22 high schools from all over New York City have descended upon the Richard Rogers Theater, none of whom lack energy in any way.

These students are here for the monthly EduHam, a program offered to students in Title I public high schools in conjunction with the Gilder Lehrman Institute of American History. It is graciously funded by the Rockefeller Center. The program has also been established in other major cities in the United States, such as Chicago, Seattle, Denver, St. Louis, Houston and Salt Lake City.

Each student at the theater enrolls in an advanced American History course, with a focus on the founding of the United States and of course, the life of Alexander Hamilton. The class culminates with a creative final presentation where students present on a finding from the course that speaks to them, in a theatrical manner. Students with the top projects are given the chance to perform their pieces on the same stage on which Hamilton is performed, while peers and cast members watch. Afterwards, all students in the audience are invited to a Q&A session with cast members and then a closed afternoon performance of Hamilton. To ensure this program is accessible to all, Rockefeller Center subsidizes ticket prices so that students only pay $10 per ticket.

Hamilton, the genius Broadway hip-hop musical created by Lin-Manuel Miranda, has become a worldwide phenomenon since its very first performance in 2015. The show tells the tale of Alexander Hamilton, who went from being a bastard orphan to becoming one of the Founding Fathers of the United States. Not only does this show have an amazing storyline, but its musical elements, which include many rap-style songs, are world-renowned. Fans everywhere have gone into a frenzy about the show. As of January 2017, the cast album surpassed one million album sales in the United States alone. Tickets for the production sell out in seconds. Within minutes, they are pawned off to ticketing sites like StubHub, where ticket prices easily climb to hundreds, and even thousands, of dollars.

So, what makes Hamilton so special, you might ask? Carvens, the Master of Ceremonies for the student performances, says the show has achieved acclaimed success because it portrays an accurate and truthful representation of American history. “Hamilton shows that America was built by people who look like them [the students]. It challenges the status quo,” he said. In addition to Hamilton, characters like Aaron Burr, Maria Reynolds, George Washington, Marquis de Lafayette, among others, represent the diversity America was built upon.

Tyler McKenzie, an ensemble member says that the show paints a different picture of American history, one which viewers can really connect to. He looks forward to the events of the day. “It’s nice to hear different perspectives,” he said. “This is my third EduHam. I can’t wait to see what the students have come up with!”

Inside the theater, the crowds are restless. The theater is alive with noise as students practice their performances within their school delegations. Nervous excitement is in the air as the clock ticks away. Only a few minutes until the performances are slated to start. The noise dies down to a quiet murmur. Tick tock. I hear the students next to me whispering frantically as they rehearse their performance for the final time.

Minutes later, Carvens enters the stage to a roar of applause. After a few introductions, he brings the first performer to the stage. Baruch Rogers Mayo walks out and begins to recite his Aaron Burr Rap. My jaw drops to the floor. Not only is this piece incredibly well-written, but Baruch is also a natural performer. My amazement does not cease as the next performer walks to the microphone. And then the next performer. And then the next. Each one dumbfounds me; I cannot believe that these are high school students on stage.

The audience is taken for a historical ride through time. We are exposed to raps, poems, monologues and odes that cover subjects ranging from the Boston Massacre Trial to the biography of Richard Allen. As the students perform, the audience cheers loudly for each and every one of them. Out of the corner of my eye, I see McKenzie cheering as Blanc, Barnes and Spence drop a beat for their Boston Massacre Rap. A huge smile spreads across his face, getting wider and wider as more people perform. Once the session comes to a close, thunderous applause erupts from the audience.

My heart is overjoyed. Never before have I seen students treat what they are learning in school so passionately, especially when that subject is history. Oftentimes, American students are only asked to memorize information so they can spit it back out on exams. But, these students are different. They are analyzing American history with a critical eye and are comparing it to issues of today. Hamilton has shown them that no matter who they are, where they come from or what they look like, they have the power to change the world, just like Alexander Hamilton did.

Hamilton tells the rags to riches tale of a man who started with nothing. His scrappy nature and keen determination to live a life that is worth telling a story about, speaks to every American. This show is more than two hours and 50 minutes of singing. It addresses so many fundamental issues that we as humans grapple with on a daily basis: Who will tell our stories? How do we build a legacy that will last over time? How do we establish a nation that we can be proud of? I can say without a doubt that the students who made up the audience for this show are already on their way to answering some of these questions, as well as some of the biggest questions that our nation is currently trying to answer. They are the performers of today, but also the leaders of tomorrow.