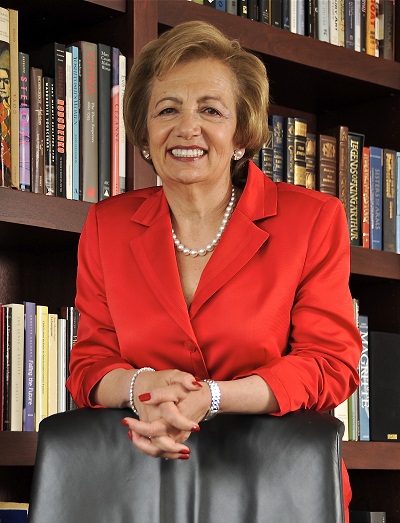 Dr. Laura Schor was the Founding Dean of the Macaulay Honors College. In honor of Women’s History Month, The Macaulay Messenger sat down with Dr. Schor to find out more about how Macaulay came to be.

The Macaulay Messenger: Can you talk about your background with Hunter and Macaulay? What inspired you to take on the job of founding dean of Macaulay?

Dr. Laura Schor: My background at Hunter started when I was hired in 1989 to be the Provost of Hunter College. Prior to that I had a lot of both academic and administrative experience at other universities, but I had never worked at Hunter and had never worked in New York. I was surprised that they offered me the job, happy to be in New York and happy to be at Hunter. I never worked so hard in my life. I put in 10-hour days with no breaks. But the sense of “We can make this place a great place” was very strong and I loved it. I worked for a wonderful president.

I was immediately aware of the fact that the faculty at Hunter were much happier than the faculty at any place I had ever been before. It didn’t make any sense to me because their teaching load was heavier, and their salaries were not as high. Yet, they loved Hunter. The reason for their surprising positive spirit was that the students were great. They loved the students, and worked hard to give them the best possible college experience. In those early years it was really a magical place to be, despite the ever-shrinking budget. Some of the good feeling was a carryover from the fact that until the years following the Second World War, Hunter had been a girls’ school. Many of the department heads were women, and a lot of the senior faculty were women. There was a lot of caring for students; it was a great place to be.

During my time as provost, I discovered that there were many honors programs at Hunter that didn’t communicate with each other. I started an intercampus Honors Council, created an annual research day, and started putting up information about students who achieved 3.5 grade point averages, emphasizing academic excellence and achievement. The research forums and newsletters, created by honors’ students, created an honors esprit de corps. I left Hunter in 1998 to pursue other interests.

Two years later, while working on a book, I got a call from Vice Chancellor for Academic Affairs at CUNY central administration asking me to return to CUNY to be the new leader of a CUNY-wide Honors program. I asked the questions that any experienced administrator would ask: Where is this program going to live? What budget would it have? What kind of authority would I have as leader of the program? What was the content? I was told, “Come, you’ll make it happen!”

I met with the Vice Chancellor, Louise Mirrer, who explained that there had been an intercampus faculty committee that worked on a proposal to create a CUNY Honors college, as a consortium of students enrolled at Hunter, Baruch, Brooklyn, Queens and Staten Island. Cross-campus activities for these students was part of the proposal. This necessitated office space, classroom space and auditorium space. I asked: Where’s the CUNY Honors College going to exist? After several ideas were rejected, we were ultimately assigned space in the Graduate Center. I agreed to take the position if I could bring an academic associate with me.  I knew that I needed someone who had good faculty and administrative experience to build the content of the program while I organized the administration. When we opened the doors, the staff included the academic director, an assistant director for cultural affairs who created the cultural passport, and a student director who developed the study abroad policies. We did not have a budget nor a budget director at that point.

We opened the CUNY Honors College at an orientation session for 186 students in the last few days of August in 2001. Almost immediately after we opened, 9/11 took place. We had students coming from each of the boroughs whose parents were terrified; they didn’t want them traveling. Nevertheless, I brought all the students together for a meeting in Manhattan and tried to reassure them that as horrible as the loss of life and destruction at the World Trade Center was, our new college will be okay; University Scholars, which is what we called the students, will continue their studies. We met as a community that year several times at the Graduate Center around the subject of cross-campus projects. Each time we met I spoke to the Scholars about the importance of their studies and about the friendships I hoped they were making among their cohort.

Within our small administrative unit, we needed to create procedures and policies for all aspects of college life. We promised every student a cultural passport and a laptop computer and access to a $7500 account to be used for study abroad and research projects. CUNY soon became concerned that the funds being allocated to this project were growing beyond their capacity to fund. I felt that we had made promises to students and were obligated to fulfill them. Had I not been an experienced administrator, a lot of those promises would have fallen by the wayside. They knew when they hired me that they wanted someone who would keep the standard really high and would make it work, and so they did everything I asked them for.

While solving financial challenges, we also had to figure out how to select the next class of students. Each campus wanted to use their own selection process. I met with representatives from all the campuses to create policy about admissions. Admissions guidelines was a struggle; each campus said, “Why should we follow your rules? You’re just the new kid on the block! We don’t even know if the Honors College will exist two years from now!” High schools didn’t know who we were in the beginning and were not curious to find out. Similarly, we quickly began to think about the post-graduation experience for our students. Graduate admissions programs were as skeptical about our new program as the high school guidance counselors at Stuyvesant and Bronx High School of Science.

The laptops we had hoped to distribute at orientation were not ready. Organizing their purchase and distribution and creating a policy for repair all took time. We also hired a group of technically competent graduate students to provide extra training on computers, the ITFs (Instructional Technology Fellows). This was a new initiative at CUNY. The ITFs had to be selected, given job descriptions, and reviewed. Ultimately, it was a very successful program.

During the first semester, it became obvious to me that we needed to hire academic advisors for each campus. Our students needed more intense advice than the advice they were getting from their campuses. They needed mentoring that would encourage them to think of graduate and professional schools and of selective scholarships. Our first group of advisors were graduate students at The Grad Center who worked part-time; over time they became full-time advisors who contributed to student development in important ways. While the Honors College hired the advisors, the program directors were hired by their campuses. They sometimes questioned policies and decisions made centrally. They reminded us that we didn’t hire them and questioned why they should we pay any attention to our policies. Creating an esprit-de-corps with them was a challenge, but the general sense that the program was working well for students won them over.

When we admitted the first class, we had a blueprint for three out of the four seminars, which had been established by the committee that led to the founding of the Honors College. They had a fourth seminar in the blueprint, but they didn’t specify what it should be. Right after 9/11, I came up with the idea that it should be about planning the future of New York. So we had to plan that course, and we also had to plan more for each of the seminars because while we had a general idea, we had never taught any of the them before. We had to bring together faculty from each campus to discuss what the arts seminar would be: to take students to an opera, to a concert — what was the objective and how would it work? What would be taught in seminars two and three? Faculty and students in the first year were asked to evaluate courses regularly and provided a lot of guidance for future years.

The students in the first class, the Class of 2005, were risk-takers. They had little reason to believe that the CUNY Honors College would work. They were high achievers in high school and could have gone to many excellent colleges. Yet, they were willing to try a new program. They soon understood that their ideas for the future of the college would be welcomed. They really helped us create the college; every time there was an issue I would turn to the students and ask them for their advice and thoughts.

The supplemental funds in the beginning were called an expense account. The idea was that students would use that money. I very much wanted it to be used for long-term study abroad; I thought that that was the best use of the money. But then obviously students who were majoring in the sciences came and said, “I can’t do long-term study abroad,” so we had to do something else. Some of the students who were undocumented or who had visa issues couldn’t do study abroad, so they had to study somewhere else. So there were many issues and we would meet every semester after a couple of students went abroad to talk about the experiences and about what worked and what didn’t work.

Click here for part II of our interview with Dr. Schor!