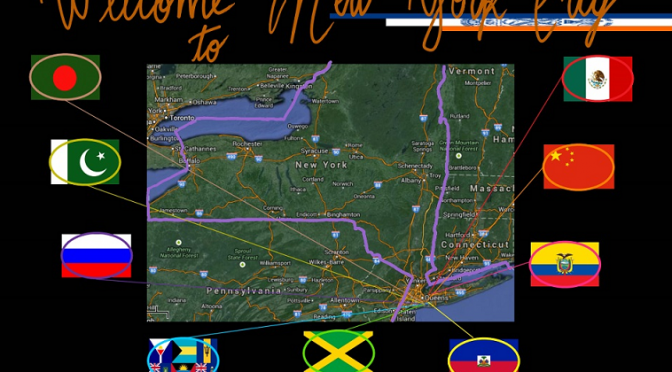 Bangladesh, located between Burma and India was once a part of India, but has been its own country since gaining their independence in 1971. The official language of Bangladesh is Bangla, and the dominant religion is Islam. Interestingly, Bangladesh is one of the few countries in the world where the national sport is cricket. As of 2013, there was a total of 1.4 million immigrants and a whooping 7.76 million emigrants. While unemployment rates are low at just 5%, underemployment is at about 40%, leaving many living in poverty. There is also a high risk for infectious diseases such as rabies, bacterial diarrhea, hepatitis A and E, and typhoid fever. Bangladesh has dealt with a great deal of government issues and corruption, but in it’s 43 years of independence, its economy has been showing a steady improvement. Nonetheless, these matters have contributed to the migration of many Bengali people.

Pakistan is a democratic parliamentary federal republic divided into three major geographic sections including the Northern Highlands, Indus River, and Balochistan Plateau making for very varied climates and landscapes ranging from the mountainous glaciers in the North to desert plains to tropical coasts in the South (K2, a mountain only dwarfed by Everest is located within Pakistan; the country contains 4 of the 14 tallest peaks worldwide). The variety of landscapes which makes infrastructure and road construction exceedingly hard has made the Karakoram Highway, a road that connects China and Pakistan, a tourist attraction–due to the road’s high elevations and the engineering feats required to construct the international highway, it is referred to as the “Eighth Wonder of the World”. The majority of citizens are Muslim and although English is the official language, most speak Punjabi. Since their independence from Britain and 1947 partition from each other, India and Pakistan have fought four wars; in recent years, India- Pakistan relations remain strained due to the 2008 Mumbai Lashkar e Taiba terrorist attacks in which more than 260 were massacred within three days. The Indian Prime Minister, Dr. Manmohan Singh accused Pakistan’s government of aiding and supporting the attacks which nearly pushed the two countries into their fifth war.
→Take the Kensington, Brooklyn walking tour.

“Out of Many, One People.” Jamaica is the fifth largest island country in the Caribbean, and is one of the best known. Jamaica recently gained its independence from Great Britain in 1962 and has become a popular vacation spot for those who yearn for the hot sun and beaches. the official language of Jamaica is English, but they are known for having their own dialects within the country which makes Jamaica unique, this dialect is called Jamaican Patois. Jamaica is dominated by the Christian religion which makes up for most of it’s population which is about 2.3 million. There are many other denominations of christianity on the island such as Baptism and Roman Catholicism. Recently, there has been a large influx of Chinese, Haitians, and Colombians into Jamaica who are now permanent residents. As of now, Jamaica is battling crime and trying to bring it to an end, hoping to halt the creation of homemade firearms on the streets. Also a fun fact is that Reggae artist Sean Paul was born and raised in Jamaica and started his career there before moving all over the world, same for the artist Bob Marley, who is also a native Jamaican. The Genres Reggae and Ska were born in Jamaica and have remained very deeply rooted in the culture.
→Take the Crown Heights, Brooklyn walking tour.

Russia, covering about one eighths of the Earth’s land, is the biggest country in the world. However, it is only the ninth most populous nation in the world, with 143 million inhabitants. Although Russian is the primary language spoken and the Russian government recognizes it as the official language, minority Russians speak regional dialects as well. Since Russia covers such a large area, there is a variety of religions practiced in Russia. The majority of Russians are Russian orthodox, which is a branch of Christianity. However, Christianity, Islam, Buddhism and Judaism also have a strong presence in Russia with the passage of the 1997 law that declared the aforementioned religions as important to Russian history. So far, Russia has experienced three waves of massive emigration. The first wave of massive emigration took place in the decades before World War I, with the majority of its emigrants being Jewish moving to America seeking freedom from religious persecution. The second wave of emigration was due to the Russian Revolution from 1917-1921. The third wave of emigration came after the Second World War, with the promise of the land of the free drawing the displaced Russians to America.
→Take the Brighton Beach, Brooklyn walking tour.

Located right off the west coast of North America, Mexico is the 14th largest country by land area. Over 89% of Mexican citizens are Roman Catholic, and the dominant language is Spanish. The recent immigration survey states that between 1995 and 2010, immigration to Mexico has risen greatly. In 1995, 670,000 immigrants were seen to have cross Mexican borders and in 2010 the immigration toll rose to 1,390,000. However, immigration from Mexico into the United States is far greater. Today, the United States has more immigrants from Mexico, than any other country, with over 120 millions Mexican immigrants. Currently, Mexico is dealing with a lot of violence between Mexican police enforcement and drug cartels that have been posing major harm and chaos in the country, especially Mexico City.
→Take the Corona, Queens walking tour.

Ecuador is a country about the size of Nevada located between Colombia, to the north, and Peru, to the south. Majority of its population, about 95%, is Roman Catholic. The official language of the country is Spanish though other languages such as Quechua and Shuar are official languages for intercultural relations. The country had a dispute with Peru in the 1990′s that was peacefully settled in 1999. However, the current situation in the country for the indigenous and rural populations is one of poverty and income inequality. Economic crisis has pushed many Ecuadorians to immigrate to the United States and Spain. The country also has its own growing immigrant population of Colombians, who are fleeing form violence in their country.
→Take the Jackson Heights, Queens walking tour.

China is one of the greatest civilizations in the world. The country can trace it’s history back 5,000 years to the small tribes which expanded to make the country what it is today. Due to economic changes in the country, China’s population growth has risen .57 percent according to the recent census. According to the Migration Police Institute, “the proportion of people over the age of 60 in China was 13.3 percent in 2010, up from 10.4 percent in 2000. The growth of the working-age population (age 15 to 64) in China is thus projected to decline, from 0.95 percent per annum between 2005 and 2010 to 0.19 percent per year from 2010 to 2020, and to -0.23 percent annually between 2020 and 2030.” In China the dominant language is a mix of two dialects; Traditional and Hanyu (simplified Chinese), and the dominant religion is Buddhism. Fun fact, China has banned, Twitter, Facebook, and The New York Times from its country since 2009.
→Take the Sunset Park, Brooklyn walking tour.

Haiti is a Caribbean country that shares an island with the Dominican Republic. While the dominant religion of Haiti is Christianity, with Roman Catholics constituting 80% of the population and Protestants constituting 16% of the population, roughly half of the population also practices Voodoo, which is can be considered a religion in and of itself. French and Creole are the official languages of Haiti resulting from a history of French and Spanish colonization and slavery. The current migration trend is a net loss of 4.12 migrants per 1000 people as of 2014. Haiti is still suffering from the 2010 earthquake that struck the country, which killed more than 220,000 people and injured more than 300, 000 others. This environmental disaster has resulted in a decline of living conditions, such as leaving more than 1.5 million people homeless and outbreaks of diseases.
→Take the Flatbush, Brooklyn walking tour.