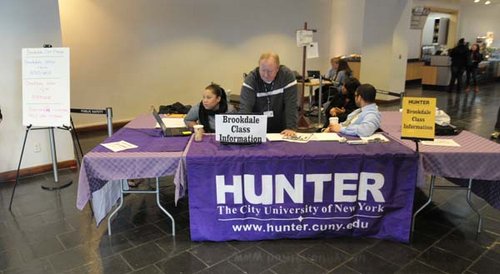 The Hunter College Brookdale Campus was declared re-opened on Wednesday, December 5, after nearly a month and a half of being closed due to damage sustained by Hurricane Sandy.

Only the North and West buildings of the Campus reopened, leaving the East building residents, as well as the Physical Therapy and Medical Lab Sciences students, still out in the cold. The staggered opening is due to the “severe damage” that the wing sustained from the storm, as detailed by an email sent to the Hunter community by President Jennifer Raab on Tuesday, December 4.

“I understand that the East Building has suffered considerable damage,” said Lucia Cappuccio, a Macaulay at Hunter senior. [But] it’s my senior year, so it’s upsetting that I haven’t been able to stay there during a really important time in my life.”

The re-opening comes after many students were upset by the lack of information and transparent communication about the status of the dormitories by the Hunter administration to many students who were either homeless or living with generous friends and family. Rumors swirled about the reopening, ranging from a date in January, to never.

“I don’t [understand] why the communication between Brookdale and the residents has been so bad. The dorms are our homes and some people don’t have other viable options for living. I am lucky I live in Queens, but what about my friends who live upstate or on parts of Staten Island that sustained storm damage? There is no reason why we shouldn’t be updated and informed about a place we live. It’s absurd,” Cappuccio said.

The campus partially reopened on time, according to a proposed schedule set by Vice President for Student Affairs Eija Ayravainen, after students increasingly voiced their concerns. Ayravainen wrote to the Hunter community in an email dated November 14 that, “It is our goal to reopen the Brookdale dormitory by early to mid-December”.

Some students were taken aback by the announcement.

“It’s a big surprise,” Mariam Kirvalidze,a Macaulay junior at Hunter, said, after hearing that the Brookdale dormitories would open on schedule. “I was getting used to living at home, but I look forward to moving back in next week; it’ll make life a lot easier.”

Nevertheless, many students, who had been living at home since Hurricane Sandy, are happy to return to Brookdale.

“I’ve been living with my parents,sharing a room with my little sister and one of my dogs. So I am THRILLED to be moving back in! It’s closer to Hunter [as] my parents live in Marine Park, Brooklyn, and I have my privacy again,”said Macaulay at Hunter senior Kaitlyn O’Hagan, who lives in the North building.

Residents who have been able to move into the dormitories are noticing the lack of hot water and heat. After complaints about a lack of notification for the situation, the Office of Residence Life sent an email stating, “Con Edison had to do emergency work on Brookdale’s steam system December 8, 2012. Due to this, the building has lost heat and hot water.The repairs are in the process of being completed and should be done within the next few hours.”

The East Building is slated to open by mid-December.