Golden Krust is a restaurants in the United States that originated in Jamaica. The owners keep many aspects of the food that is served the same. However, there are some aspects that are still kept constant that allow the restaurant and the people who own and work there to identify as Jamaicans. 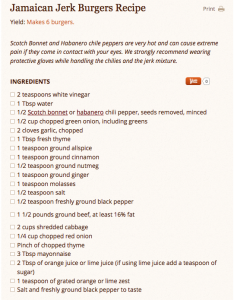 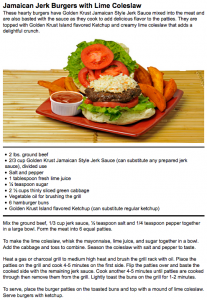 Golden Krust Jamaican Jerk Burgers with Lime Coleslaw recipe has spices such as salt and pepper that is often used with meals in the United States. The original recipe from Jamaica for the Jamaican jerk burgers contains spice mixtures of Scotch bonnet peppers, allspice, thyme, cinnamon, nutmeg, green onions, and garlic. The spices used to make the Jerk Burger have been modified to match the taste of American Customers. They still hold on to some parts of the recipe. An example is the green cabbage that is included in the American recipe for the Jerk Burger as well as the Jamaican jerk burger from Jamaica. The owners of the Golden Krust Bakery are retaining their identity as Jamaicans by keeping parts of the recipe the same as the recipe that is used in Jamaica. 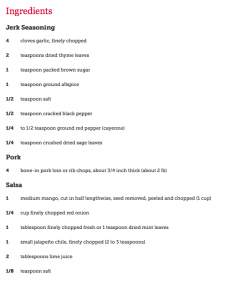 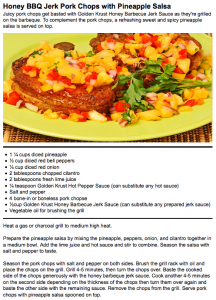 The recipe for Honey BBQ Jerk Pork chops with pineapple salsa also contains different seasonings than the original jerk pork chops from Jamaica. While it is true that the recipe of food are modified when Caribbean people move to the United States, the food still keeps much of its original taste. Even with the modified recipe, people still identify with the food and the identity of being Jamaican that comes with the Jamaican food (Recipes). Golden Krust is a transnational restaurant that has a diverse customer base and provides their customers with food that are similar to the ones made in Jamaica while making sure to adapt the recipe to suit the taste of the diverse customer base. The changes in the recipe show the transnationalism that connects New York City to Jamaica.