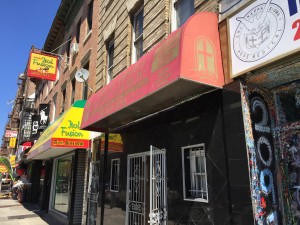 Unlike Roman Catholicism, which is an ethnically diverse religion, the Yoruba Orisha Baptist denomination is a uniquely Caribbean syncretic religion, originated in Trinidad/Tobago, that combines Protestant, Catholic, African and Kabbalistic elements into their worship, but self-identifies as Protestant (Schmidt 43). Women can gain very powerful roles in this church, causing it to have many female followers. In this church, baptisms, mourning, possession by the Spirit, shaking, dancing, speaking in tongues and bringing back spiritual gifts from spiritual adventures are at the center of worshipping (Smith).

What makes this religion very appealing to Caribbean immigrants is that they the faithful believe they can communicate with the divine through possession of the Holy Spirit. In other words, immigrants believe that they can attend a Yoruba Orisha Baptist service and ask their god for solutions to their problems. This belief provides people hope. It assures them that their God exists and that He is watching over them. The inclusion of drums in the services along with Caribbean spirituals also make this religion alluring to Caribbean immigrants because they feel more at home rather than in a foreign land (Schmidt 51). It manages to build a bridge between Trinidad/Tobago and New York City. Some members describe entering their Spiritual Baptist Church as entering Trinidad.

Every Sunday service ends with a communal lunch, where members discuss important issues for the Caribbean community in New York City and back home, give out awards to some members and organize the liturgy for the next weeks (Schmidt 51). Members can also network with each other before and after the religious services. The Yoruba Orisha Baptist Church gives Caribbean immigrants a sense of belonging to a community, providing them the confidence to continue with the struggles of their daily lives. They may face oppression throughout the week at their jobs, schools, neighborhoods etc, but this is all forgotten when they get together with their brothers and sisters of the church.

The Spiritual Baptist Church is appealing to second and even third generation people because it allows them to explore the different cultural aspects of their origins. In the unique prayer services where everyone follows a Caribbean dress code, has a Caribbean hairstyle and sing, pray and dance and play their Caribbean instruments, the youngsters are able to observe where they come from and who they are. Many decide to become involved with this community because it is one of the few communities that are willing to accept them as members. That is why there are many people who have a zeal for the cultural and spiritual aspects of this religion without ever having been to their parents’ homeland. 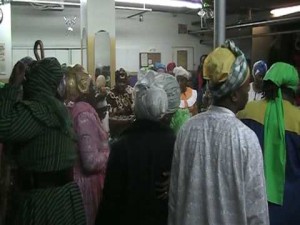 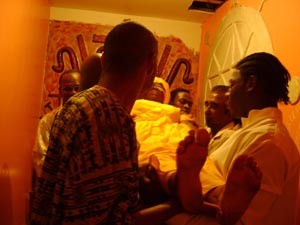 The pictures above show the unique services of Yoruba Orisha Baptists. They all wear traditional Caribbean clothing. Outside guests are not frowned upon but it is awkward because everything that is said during their services is understood only by the faithful. The picture on the top right shows a woman who without any restraint is allowing herself to go to the mourning room where she will mourn her sorrows and travel into the spiritual universe to discover the origins of her problems.

This video showing a Yoruba Orisha Baptist Christening is used as an example to show how deeply intertwined the theological aspect of this religion is with Caribbean culture. WE see here a Christian aspect of the religion (baptism) as well as Caribbean aspects(dress code, offerings). Everyone is dressed in traditional Caribbean clothing. People are singing in their native tongues and incorporate instruments that have a deeply religious significance. All these elements demonstrate how attending a Yoruba Orisha Baptist service in New York City helps immigrants connect back to their homeland. It is as if when attending a service, you were in Trinidad/Tobago. The Christian symbology is present in their service but the Caribbean cultural influence is definitely present. This picture shows the importance of drum playing in Yoruba Orisha Baptist services. The rhythm of the drums control the way people pray, sing and dance to praise their god. The fact that women are playing these very important instruments demonstrates that they have important roles in their church.