The waving of hands and inclusion of Caribbean spirituals is common in Roman Catholic Eucharists celebrated for congregations with a large Caribbean population. It is their way of expressing their faith. 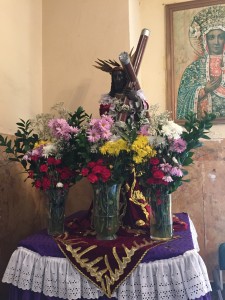 This a statue of the Haitian Depiction of Jesus Christ carrying his cross. Many Haitian Catholic immigrants look at this statue with admiration and it encourages them to carry their own cross (sufferings, problems, issues).

When the first wave of Caribbean immigrants migrated to New York City, some abandoned their Catholic faith because the American Catholic Church was not as welcoming to immigrants as it is today. The Archdiocese of New York did not have priests who spoke the immigrants’ language and many immigrants did not feel a sense of belonging to their parishes (Schmidt 37). Priests were more concentrated on spreading the gospel than helping immigrants with their issues.

Having noticed these issues, the archbishop created a Hispanic ministry office that little by little started to treat Latino, Hispanic and Caribbean migrants according to their national identity (Schmidt 37). Today, the Catholic Church in the city offers weekly mass in more than 21 languages and makes distinctions between the various Catholic traditions of people from completely different places with the celebration of national festivals and processions (Schmidt 37). The changes made in the relationship between the clergymen and the laity has allowed for Catholicism to become more appealing to immigrants. Priests have had to change the way they assist the laity. People who are American natives may just want the priest to be present in baptisms, weddings, funerals and other religious sacraments, while immigrants may want the priest to help them find affordable housing, jobs and furniture (Niebuhr). The archdiocese has had to hire more priests from places other than the United States so that they can appeal to the immigrant population. English speaking priests would not have the same dynamic that priests who speak the vernacular language of the congregation have. It would be like going back to the pre-Vatican II era, when mass was said in Latin.

At Saint Matthew’s Roman Catholic Church located on Eastern Parkway in Brooklyn, the traditional Catholic mass was interspersed with different elements of Haitian culture. The mass was said in Haitian Creole, incorporated Caribbean spirituals, and instruments like drums in their music worship. The laity, rather than wearing formal Western clothes, had on a more traditional Haitian dress code. Everyone was asked to shake hands with the people around them to establish a closer relationship right at the beginning of the eucharistic celebration. This is highly unconventional but was probably done to make the atmosphere more friendly. At the end of the mass, the priest who was also of Haitian descent stood outside of the church to greet all the people, who seem to know him really well. I noticed that Haitian women tend to have a more numerous presence in mass, which must mean that they are the ones who are in charge of transmitting their faith to their children.

Something unique to the Haitian congregation that I noticed was that many o the Haitian women wore veils to the mass. Veils were required to be worn by women during the pre-Vatican II time period. I guess it has to do with tradition. From my own experience with Roman Catholicism, the church abroad is often stricter and more conservative than the church in the United States. There are certain things that some clergymen view as normal that clergymen elsewhere would fret about. 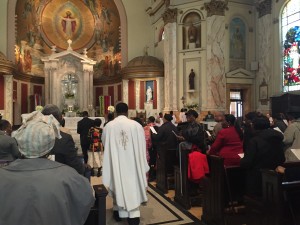 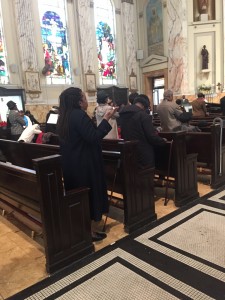 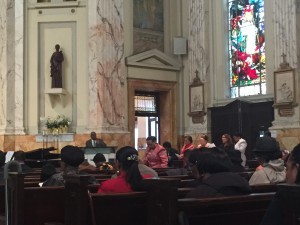 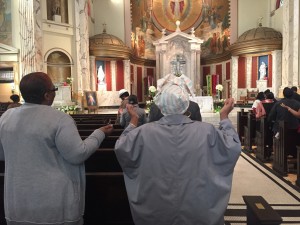 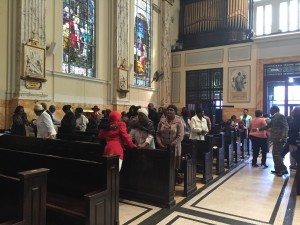 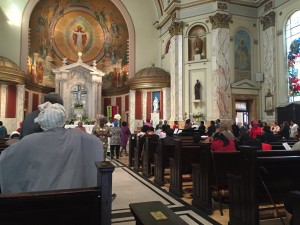 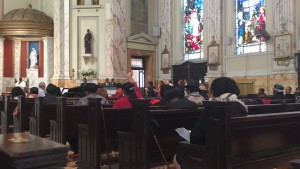 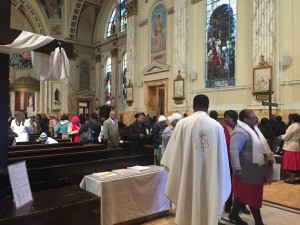 These are pictures of different parts of the mass in Saint Matthew’s Roman Catholic Church. As you can see most of the Haitian Laity is wearing traditional Caribbean clothes. They have their own unique ways of worshipping God. Despite certain cultural elements, the Haitian congregation manages to maintain the same Catholic religious liturgical practices. The ability to maintain a uniformity in Catholicism throughout the world is admirable.

This video shows the Alleluia being sung before the proclamation of the Gospel. The Haitian faithful have their own unique way of singing this hymn (as does every church community worldwide). The way they sing it is appealing to the ear.

In this video the viewer can see the unique way the Haitian faithful have to praise God. The congregation is made up of mostly women who all have traditional Caribbean clothes and hairstyles. The instruments are common but the overall sound they make is very unique.

This song is a common hymn sang after the distribution of the consecrated wine and host to the faithful. In it we can once again see how Haitian worship differs from other types of worship. The instruments create a very unique and appealing sound. Towards the end a woman in the congregation lifts her hand, which is her way of showing that she feels God’s spirit present in the church. Movements of hands are common ways of demonstrating that God is alive and present in the church.